Banks: here’s how to mean business instead of being mean to business

THE ROYAL COMMISSION on banking and financial services ‘misconduct’ has thrown up many situations that – as the oft-used expression goes – took many people by surprise. Apparently even the bank and insurance company CEOS …

But nothing that has come forward in the Royal Commission has taken the average small or medium business owner faintly by surprise. Why? Because they have seen, heard or experienced it all – and worse. 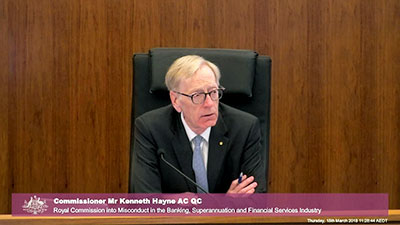 The surprise for Business Acumen – which has been hearing and charting stories of financial services misconduct for 15 years – is that some of the worst cases in which the banks have liquidated companies and ruined the asset bases for generations of families, have not rated a mention.

The fact is that those cases have rarely been charted beyond the direct circle of those involved – and most certainly have not been a common source of knowledge within the financial institution perpetrating such action.

Sure, financial advice being charged out to deceased clients is a headline, and tens of thousands of dollars may be at stake.

But certain other examples did not make the cut at the Royal Commission, even though they took people down for millions of dollars. 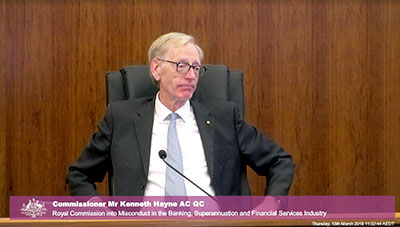 One example Business Acumen knows about involved a major bank forcing the sale, at the start of the GFC, of an innovative multi-product family farm which melded dairy cows with small crops and with aquaculture.

The farm was suddenly valued down by the bank-in-crisis from more than $5-6 million to about $3 million, triggering a cash panic and eventual liquidation sale. The sale barely covered the loans and the family was left farmless and virtually penniless – especially after legal fees generated by the family’s efforts to stop the liquidation and fight the bank’s high fees and penalty interest.

This farmer had been developing energy self-sufficiency through solar and bio-generation and also applying new robotic milking techniques to the dairy. The farmer was also well advanced in developing the property as an educational attraction for school children, already catering for regional primary and secondary schools. 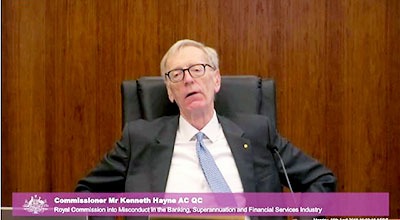 The case was put up for consideration by the Royal Commission but was not accepted. The former farmer, who has struggled to make a living ever since and is now in his mid-70s, was told it did not fall within the current ‘scope’ of the commission.

Perhaps the most ironic thing about this case was that the farmer had previously enjoyed a successful career as a rural bank manager.  Even so, he could not anticipate the actions of the modern banking system – and the spurious delegation of management responsibility to decision makers far, far away.

Someone who does understand the modern financial services system is securities investment firm Motely Fool Australia general manager Scott Phillips. In a recent lament on the way banking has gone in Australia, he wrote: 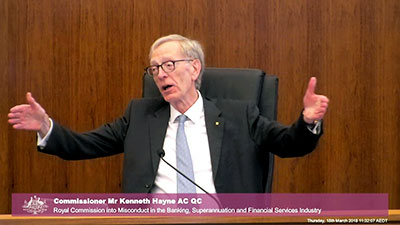 “There was once a time when your local bank manager was a pillar of the community. He – and it was always a ‘he’ – knew everyone, every business and every risk. He’d use that knowledge when it came to working out who to dole loans out to. And was almost always right.

“Then, of course, the real bean counters took over. With computers and algorithms ready to replace the nous of the locals. It was cheaper. Easier. More consistent.

“But, of course, with great power came great responsibility. Mistakes, when they were made, were larger and most costly – for the banks and their customers. Incentives, introduced to help the banks grow, induced some – many – to prioritise their own wallets at the expense of their customers’ pocketbooks.

“It's so much easier to design a system that hurts a lot of people than to have to do it, one customer at a time, from across the desk.”

He is right, of course, the banks were seeking efficiencies through technology and implementing new management systems already deployed in the US and Europe – efficiencies that should have made the big banks and their customers more money. But decision making was removed from the point of impact and fell into the realm of the ‘theoretical’.

So why, now, expect artificial intelligence (AI) to restore the bank-business-customer situation when banks are not even apparently using human intelligence?

“No, I don’t think most of it was intentional. But it was real,” Mr Phillips said. “And it was painful for those customers. The desk-jockey at headquarters could change a few words in the terms and conditions of an insurance policy … could influence the list of ‘approved investments’ for the bank’s financial planners, which had the effect of improving the bank’s bottom line at the customers’ expense. Or … could introduce monthly fees – it’s only a few bucks, after all – that most customers paid, rather than changing banks.

“But because there wasn’t a customer in sight, these changes didn’t feel so bad. And they boosted the bank’s profit and earned her a bonus. No-one really got hurt, right?”

Add to the fact that the banks were in abject panic at the start of the GFC and it got worse, not better, by 2012 when many more businesses’ cash reserves had been soaked up through meeting the demands of the banks for a re-balance of loan valuation ratios (LVRs)  and other urgent orders (not requests) to pay down loans.

The Royal Commission is a result of the banks pushing too many people too hard until it had a political impact. Few business leaders (even leadership teams at the big four banks) would not now agree that the Royal Commission was a necessity to help re-set the entire trust system.

But most business leaders outside the banks – especially those who have been on the receiving end one way or another – worry that the Royal Commission has had a more sensational consumer case bent than a more balanced look at the serious ramifications on SMEs and farmers.

Or, to put it another way, how bank profit extremism has decimated the family-led businesses and SMEs, across all industries, that underpin Australia’s economy.

They are the ones who lose private property when their businesses fall foul of the banks. They have never been able to get business loans from a bank without putting their family homes on the line.

They are the ones who generate new jobs more rapidly, yet hold on the longest before letting staff go. (What’s the biggest structural problem in our economy right now? Something to do with long-term  jobs?)

So while small business and farmers have seen some light at the end of the tunnel – mainly through the lobbying and publicity work of the Australian Small Business and Family Enterprise Ombudsman (and banks trying to head off looming financial consequences) – not much has happened so far regarding compensation for actions that have destroyed businesses and livelihoods in the past.

Changing the rules so that poor behaviour does not continue into the future is one thing. A much harder ‘thing’ is what to do about the damage already done and those who have been financially destroyed – and others who have died waiting for justice.

The fact that these things happened during the big banks’ succession of most profitable years on record must provide a starting point. Just because the banks have got that money does not mean it should remain theirs.

That’s right, some of that money simply has to go back to where it rightly and fairly belongs. And let’s not see this done through some complicated legal-led process that shells more out to ‘the legal industry’ than the very people affected.

Here’s one uncomfortably practical idea: Banks can start by paying back all the fees and penalty interest they charged on mortgage-backed business loans that fell behind schedule (we have witnessed cases of mortgage-secured loans in arrears being ratcheted up to 19 percent). Banks may argue that most of those businesses no longer exist – true – but the families who owned those homes certainly do.

Many small business people who lost homes in that frenetic GFC period today cannot even scrape together a deposit. Such recompense would change that whole dynamic – and SMEs would truly know the banks are serious about making good.

If banking decisions were, today, still made personally by local managers, they would do it. They would look you in the eye as they did so. And you could look them in the eye as you thanked them for setting things right.