BUSINESS ACUMEN’s special report on leadership, in edition 93, could not be more timely. Or more poignant. Or better described.

That is because this report comes from someone who has proven that great leadership can make lives better, overcome seemingly impossible situations – and save lives.

To look at leadership through such a prism, sadly, makes a stark and depressing contrast to leadership failures in other areas of Australian life at the moment – such as politics and at the top of our financial sector. 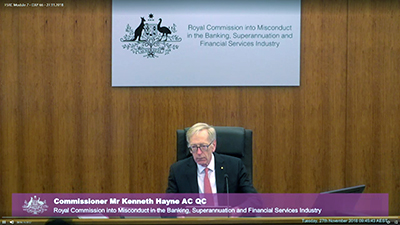 After all, we have just recently lost another national leader, Malcolm Turnbull, in a bitter example of political infighting that the general public simply does not understand the need for, right now. That is because most Australians feel that leadership should be all about community interest, not-at-all about self interest.

The outcome of the back-stabbing and brawling that has seen the Prime Minister honour board read more like an MMA fight card – Rudd, Gillard, Rudd, Abbott, Turnbull, Morrison – for no appreciable gain for Australians in general, has sadly diminished public trust in the way the country’s political leaders conduct themselves. It is apparent that self interest (being elected to government, rather than governing) trumps public interest.

It is a malaise that certain sectors of business in Australia cannot feel self-righteous about either, given the revelations of the Royal Commission into banking and insurance. So many formerly feted and stratospherically-paid business leaders – many of them also having held esteemed advisory roles with government – have opted out of their once ‘stellar’ careers rather than face the ‘cruel pull’ of gravity that is the Royal Commission.

Even many of those who have avoided the ‘hot seat’ of the Royal Commission have seen their reputations as effective leaders crash and burn through the testimony of others – former customers and corporate whistleblowers – and with the critical evidence presented.

GREED IS NOT GOOD

As is quoted in Acumen’s 93rd edition’s Special Report on Leadership: “Success sometimes breeds cancerous ego and greed. Even good leaders can eventually fall prey to believing their own bulldust. If you look at successful businesses led by very good chief executives, who clearly are great leaders, ego, hubris and conceit nearly always creep in before a fall. They increasingly forget to credit the teams that enabled their success. This is when the rot creeps in. A cook is only as good as his last meal. Generally, when the ego takes over that’s when they drop the ball and fall.”

An accurate assessment, and one made by a still-today-highly-regarded Australian business leader who was making those comments based on decades of observation of his peers – and well before the Hayne Royal Commission came to town.

This is, in fact, is one of several perspicacious quotes drawn from the book Fly! Life Lessons from the Cockpit of QF32, written by Richard De Crespigny, the captain at the helm – or, more accurately, in the hot seat – when Qantas flight 32 suffered a catastrophic engine explosion over Singapore in November, 2010. The blast sprayed out shrapnel, oil and fuel that damaged the wing and fuselage, crippling the Airbus A380.

It was a ‘Black Swan’ incident that could, in all probability according to accident investigators, have ended the lives of all 469 people on board.  There was no walking away from being in that ‘hot seat’ in that moment for Richard De Crespigny. But as he recounts in his book, it was his many years of studying effective leaders and how they behaved in high-stress situations – rallying their teams to perform at their very best – that allowed those 469 people to all walk away.

While Mr De Crespigny has already written a book about the incident (and near fatal accident) itself, named QF32, in this latest book he relates the many years of research he had conducted on leadership and human behaviour under stress that underpinned the result QF32’s crew achieved that day.

He has mapped out the neuroscience behind behaviour and leadership under extreme stress. He has interviewed and quotes a selection of his most admired and genuine leaders, including first-man-on-the-moon Neil Armstrong, NASA’s Apollo program flight director Gene Kranz, and the airline captain who performed ‘the Miracle on the Hudson’, Chesley ‘Sully’ Sullenberger who landed his stricken aircraft on the Hudson River, New York.

And, yes, he also draws life lessons from leadership methods of political and business ‘greats’ who have proven themselves time and again under duress as compassionate and empathetic – but strong – leaders.

If ever there was an Australian book that should be mandatory reading for Australian business and political leaders, Richard De Crespigny’s Fly! would be hard to beat. 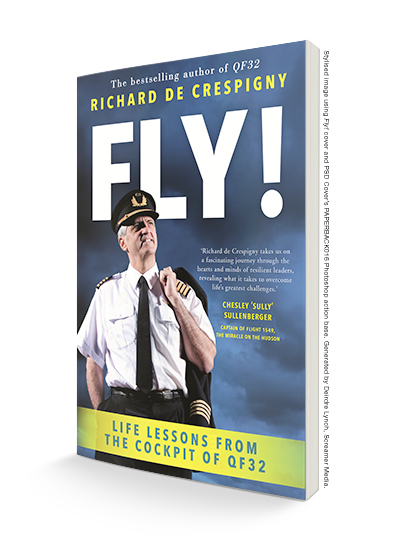