AI will give doctors ‘peace of mind with each diagnosis’

ARTIFICIAL INTELLIGENCE (AI) will become the norm in medicine, according to franklin.ai, the joint venture between harrison.ai, the clinically-led healthcare AI company and Sonic Healthcare (ASX:SHL), the global medical diagnostics company.

Franklin.ai general manager Peter Dassos said AI would improve the ability of doctors and pathologists to diagnose conditions such as cancer.

“When I think of AI in the health sector, I think of it providing peace of mind with every single diagnosis,” Mr Dassos told Talking Business.

“I’m considering it as a peer review on every single patient case.

“You don’t have to look far globally to see health care systems are under pressure and need support and I think intelligent software solutions, AI driven, are part of the key to transforming not only access to health care but the quality of health care across a range of specialties.”

Mr Dassos cited cancer as an example of where 100 percent of cancer pathologies required some form of laboratory pathology. Rather than looking at a subset of findings for a given case, the AI can provide pathologists with a broad number of findings, he said. 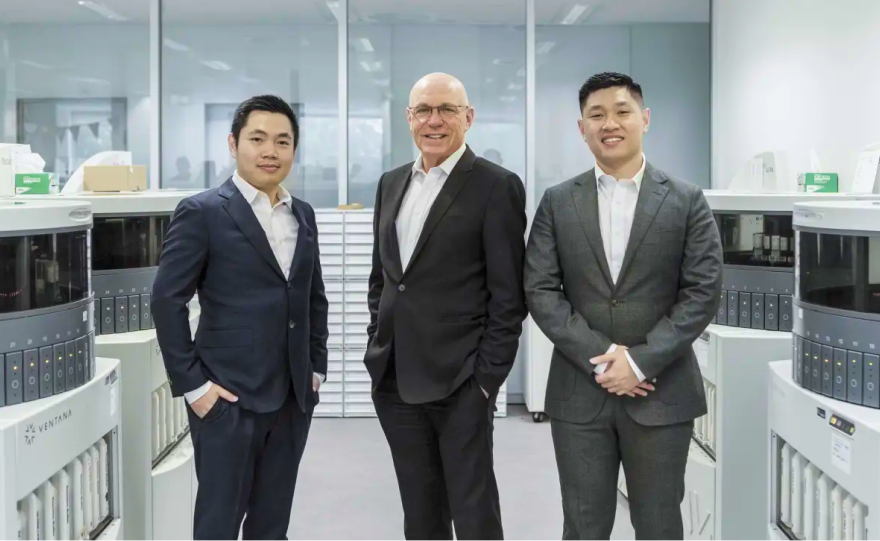 “The real benefit of comprehensive AI is that it can analyse a tissue sample, not just for one or two or three abnormalities but for a broad range of abnormalities. That’s one of the key differentiators we’re looking at delivering with our AI solution.

“It’s the ability to broadly add a specimen or multiple specimens and share those insights with the doctor.”

Mr Dassos said AI was like doctors having a colleague that they could tap on the shoulder for a second opinion on every single case, rather than cases that may be of interest,

“That benefit of almost a 100 percent second opinion or 100 percent peer review on every analysis performed,” he said.

Mr Dassos himself comes from an engineering background. He studied engineering at the University of New South Wales and his final year thesis focussed on understanding cochlear implants in brain MRIs and how that could impact diagnosis.

With that background in medtech and biomedical engineering, he spent a decade at Resmed launching cloud and software solutions and then transitioned into harrison.ai with the primary goal of setting up franklin.ai.

Mr Dassos said AI models fed off complex data sets and franklin.ai was in the process of building a large team with diverse skill sets. \

These included the AI component, the front end team of doctors, and a platform engineering team that is working on “all the technology under the hood”. There is also a clinical team, regulatory affairs and quality assurance components.

The findings will be scientifically validated and published in peer-reviewed journals.across the globe.

“I believe this concept of augmenting doctors with AI insights is going to become the norm in modern medicine,” Mr Dassos said.

“This concept or paradigm of a second pair of eyes on every single case is going to apply not just to pathology but to a number of areas across modern medicine.”

Mr Dassos pointed out that the Royal College of Pathologists of Australasia was reporting on current and projected pathologist shortages.

“When I think of global health care shortages, across medical specialties, and I think of that ability to provide that second pair of eyes or an instant second opinion, I think of peace of mind for doctors and patients, and I think it will absolutely become the norm as part of a doctor’s daily workflows,” Mr Dassos said.