THE Australian Made Campaign (AMCL) has affected a high profile bust against counterfeiters, after the Australian Border Force seized a consignment of pianos – travelling to and from China – falsely claiming to be Australian Made.

The container of pianos arrived at the Port of Brisbane on June 2 from China and on June 5 AMCL received notice that Border Force Queensland had successfully intercepted 10 pianos.

The pianos carried a number of logos and stamps claiming to be ‘Made in Australia’ or ‘Designed and Assembled in Australia’ with one closely replicating the iconic green-and-gold Australian Made logo.

Border Force officials said the imported pianos were to be transhipped back to China, presumably so retailers involved could provide documentation showing that they were from, or made, in Australia.

During the process, the importer applied to Border Force to have the seized instruments released.

AMCL chief executive Ian Harrison said, as part of their claim, the importers provided evidence they had registered a ‘copycat’ Australian Made logo as a Class 15 trademark in China, in a bid to further con consumers.

“We discovered the logo they trademarked was not even the logo used on the imported pianos  – it was a direct copy of our trusted Australian Made logo,” Mr Harrison said.

Mr Harrison said Australia’s excellent reputation for producing quality products and produce made certified Australian Made goods a target for cheats and counterfeiters. 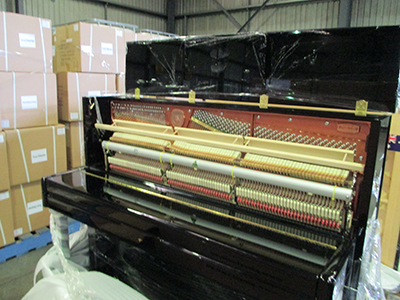 “AMCL condemns the use of country-of-origin claims that are intended to mislead and confuse consumers, particularly when those claims involve unauthorised use of the Australian Made logo,” Mr Harrison said.

“Fraudulent manufactures like this one have clear agendas: to swindle consumers. This was a clear cut situation whereby the manufacturer’s intention was to build dubious-quality pianos in China to pass off as premium Australian Made products to sell back to Chinese consumers.

“They put the bogus Australian Made logos on them to further deceive potential buyers then shipped the instruments to Australia and back again in attempt to have appropriate paperwork in attempt to prove they came from here.”

Mr Harrison applauded the efforts of Border Force officials for “yet another successful interception of counterfeit products”.

The importer has since contacted Border Force to rescind its claim for release of the goods – meaning the pianos will be destroyed.

AMCL is investigating what legal action can be taken to challenge the company’s trademark in China.

Earlier this year, AMCL’s action against a chain of misleading websites selling Chinese ugg boots as Australian made, resulted in the cancellation the company’s domain names and take-down of all its websites.

Mr Harrison said AMCL would continue to work with key bodies such as Border Force and the Australian Competition and Consumer Commission (ACCC) to enforce clear and accurate country-of-origin branding for products.

AMCL is a not-for-profit public company that administers and promotes the Australian Made, Australian logo, established by the Australian Chamber of Commerce and Industry (ACCI) and the network of state and territory chambers of commerce, with the cooperation of the Federal Government.