WESTERN Sydney Airport Company (WSA Co) has marked its first year in business, moving from a ‘startup’ phase and into infrastructure delivery.

The Australian Government established WSA Co just over a year ago, following through on its equity investment of $5.3 billion to build and operate Western Sydney Airport.

“This time last year, we established WSA Co with four board members charged with delivering one of the most significant transport infrastructure projects in Australia,” Federal Urban Infrastructure and Cities Minister, Paul Fletcher said.

“The full board complement was appointed by November 2017, resulting in a board of seven with the right mix of skills and expertise to lead the delivery of Western Sydney Airport. 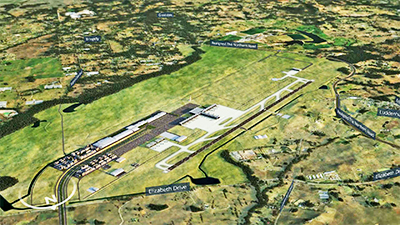 “WSA Co has since transitioned from start up to delivery. The company has established its base in central Liverpool and has its first critical project well underway – the nearly $100 million project to move an overhead high voltage cable is already well ahead of schedule.

Mr Fletcher said the Western Sydney Airport construction activity would support more than 11,000 direct and indirect jobs overall, “and WSA Co has also made a firm commitment to the people of Western Sydney, by setting strict local workforce targets”.

“The Australian Government continues to work closely with WSA Co to ensure the company meets its regulatory obligations and the project stays on track for the airport to open in 2026,” Mr Fletcher said.

Western Sydney Airport chief executive Graham Millett said it marked “both the end of a long journey and the start of an exciting new one”.

“It’s been talked about for decades, but now we’re ending the speculation – Western Sydney Airport is coming,” Mr Millett said.

QANTAS and Jetstar will operate from Western Sydney Airport. This follows the recent announcement that Virgin Australia intends to operate both Virgin and Tiger Airways flights from the new airport currently under construction.

The airport will have a 3.7km runway, capable of servicing the largest commercial aircraft such as the Airbus A380 and Boeing 747, and will have a high quality design reflecting the confidence and aspirations of Western Sydney, according to Urban Infrastructure Minister Paul Fletcher.

“More than 2 million people live closer to Western Sydney Airport than the existing airport at Mascot, and being an international airport will ensure that the people of Western Sydney get access to the air services that they deserve.”

Archerfield Airport hosts Commemoration of the Centenary of the Armistice

AS A VITAL military facility for Australia during World War Two, Archerfield Airport will be a prime venue for a special Commemoration of the Centenary of the Armistice this Remembrance Day.

The event at Brisbane’s metropolitan airport is open to the public and will be hosted by Archerfield Airport Corporation (AAC) and the Forest Lake Squadron of the Australian Air League.

As part of the commemorations, bells in bell towers across Australia, New Zealand and the UK will ring to mark this significant anniversary of the end of the 1914-18 Great War – World War One – hostilities.

Cadets and guests of the Remembrance Day service at Archerfield Airport will ring hand bells after the minute of sacred silence. 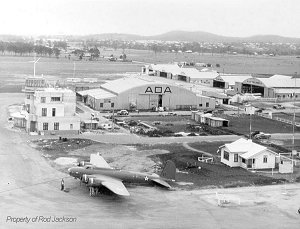 Archerfield Airport general manager, Heather Mattes, will speak about the airport’s key military role in the defence of Australia and its vital training drive before and during World War Two.

The airfield was also a major offloading and maintenance port for military aircraft and equipment.

The move is part of HES’ broader goals to introduce long range zero emission aviation powered by renewable hydrogen, which it claims is “the most energy dense element in the universe”.

Thinking big yet starting small, the same company that started introducing its range-extending propulsion technology to small drones several years ago is now evolving towards manned aerial platforms, such as flying cars and inter-urban electric aircraft. 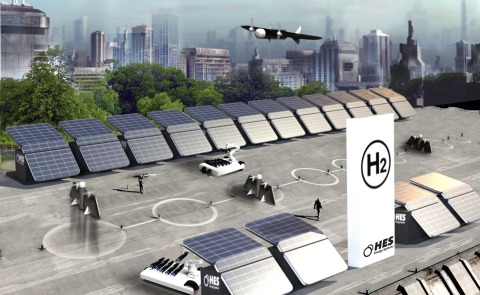 From its lab in Singapore, HES has spent the last 10 years developing advanced ultra-light hydrogen propulsion systems that are up to 10 times lighter than batteries. Following a number of international experiments powering small unmanned aircraft for record durations, HES’s systems are now being scaled up to power larger manned electric aircraft, potentially revolutionising aerial logistics and mobility – increasing their flight range while eliminating carbon emissions.

A subsidiary of H3 Dynamics, HES is part of the France-Singapore innovation link that continues to intensify between both countries. Last year H3 Dynamics set the tone by opening its European headquarters in Paris with the hearty welcome of French President Emmanuel Macron. HES is now following suit and joining forces with France’s aerospace and hydrogen eco-system.

As part of its set up in France, HES is announcing its partnership with France’s leading professional unmanned aircraft builder, delair, and ERGOSUP, a French start-up developing energy-efficient hydrogen production systems.

HES plans to scale up the program to a continental network of hydrogen air bases for a fleet of autonomous, long-range and electric aircraft. The joint initiative will create economic and social benefits, Mr Wankewycz said, while starting the path to reducing carbon emissions in aviation.

“We are proud to start our initiatives in France and we look forward to bright outcomes together with our partners,” Mr Wankewycz said. “This is a major step toward an exciting prospect: zero emission aerial mobility”.

Aligning well with HES’s roadmap, more than50  global leaders in the energy, transport, and industrial sectors, led by the CEO and chairman of Air Liquide and the chairman of Hyundai, came together on September 14 to announce their landmark commitment to 100 percent decarbonized hydrogen for all mobility applications by 2030.

France’s government has meanwhile launched a national hydrogen plan to utilize hydrogen across all sectors.

Satellite technology lifts safety and efficiency in our skies

AIR TRANSPORT in remote and regional Australia is set to be transformed by a new satellite positioning technology currently being trialled by Geoscience Australia.

The aviation trial is one of 25 currently being run across the country.

Airservices is leading the Satellite-Based Augmentation System (SBAS) project on behalf of the aviation industry, fitting SBAS technology into aircraft and testing it across regional Australia.

An operational SBAS would improve safety by guiding pilots with greater accuracy, especially those flying into regional aerodromes operating under Instrument Flight Rules (IFR). SBAS technology provides accurate guidance for landing procedures at regional aerodromes where ground infrastructure may not be as advanced as that used at larger airports. 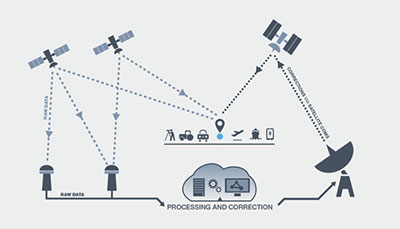 “This could mean a pilot can now attempt a landing without visuals down to 200 feet,” Dr Dawson said.

“The safety and efficiency benefits this technology provides will result in fewer flights being cancelled or diverted, and can also reduce the number of landing attempts flights may need to make during poor weather.”

This will be of particular benefit to services like the Royal Flying Doctor Service, which provides emergency medical transport and primary health care to rural and remote Australia, and often needs to undertake landings in varying weather conditions and at small, remote airfields and other locations where infrastructure and technology is limited.

Minister for Resources and Northern Australia, Matt Canavan, Geoscience Australia CEO James Johnson, and Airservices Australia CEO Jason Harfield, hosted an event at Canberra International Airport in April to demonstrate the technology to representatives from the aviation industry and media.

The event provided an opportunity for pilots to talk about how the technology would help Australian aviation. Aircraft present at the event included the Toll Air Ambulance, used for patient rescue, retrieval and treatment, in communities in New South Wales and the ACT, and an aircraft used by the Royal Flying Doctor Service.

The aviation component of the trial will test two technologies: first and second generation SBAS.

Airservices Australia will receive up to $310,000 in funding from the Australian and New Zealand Governments to trial the technology.

The broader two-year SBAS trial program includes projects in the agriculture, construction, consumer and utilities, resources, spatial and transport industries. It is being funded with $12 million from the Australian Government and a further $2 million from the New Zealand Government.

Priorities are to develop a broad long term strategic perspective for GA; propose how air safety regulation can support GA through clear, consistently applied, and proportionally responsive administration; and maintain and enhance GA industry capability, through workforce development and access to airspace and infrastructure.

GA Advisory Group chair and Royal Flying Doctor Service of Australia CEO, Martin Laverty said Deputy Prime Minister and Minister for Infrastructure and Transport, Michael McCormack had “given the GA Advisory Group freedom to identify our own opportunities for growth and to present its ideas on solutions to some of our challenges”.

“The GA Advisory Group was established by the then-Minister Darren Chester in October 2016, to provide the very diverse GA sector with a forum to advise the government on its priorities,” Mr McCormack said.

“I welcome the establishment of the GA Flight Plan and I have asked the Department of Infrastructure, Regional Development and Cities and the Civil Aviation Safety Authority (CASA) to work with the Group in responding to these priorities.

“To ensure the group is able to complete the work outlined in the GA Flight Plan, the group’s membership and operations will continue for a further two years and I look forward to working constructively with the Group during this period.”

Dr Laverty thanked the Deputy Prime Minister for his strong backing of the GA industry.

CASA CEO and director of Aviation Safety, Shane Carmody welcomed the opportunity to work closely with the GA Advisory Group and to strengthen the safety regulator’s ties with GA.

“I’m pleased to have met with the GA Advisory Group, and to plan to use it as an ongoing reference group on safety regulatory issues relating to the GA sector,” Mr Carmody said.

ARCHERFIELD Airport plans to celebrate its 20th year since privatisation with free landing fees throughout July.

Brisbane's metropolitan airport south of the CBD, which at one stage was Queensland's major airport and Australia's largest air base during World War Two, is today one of the country's leading pilot and aviation industry training centres. 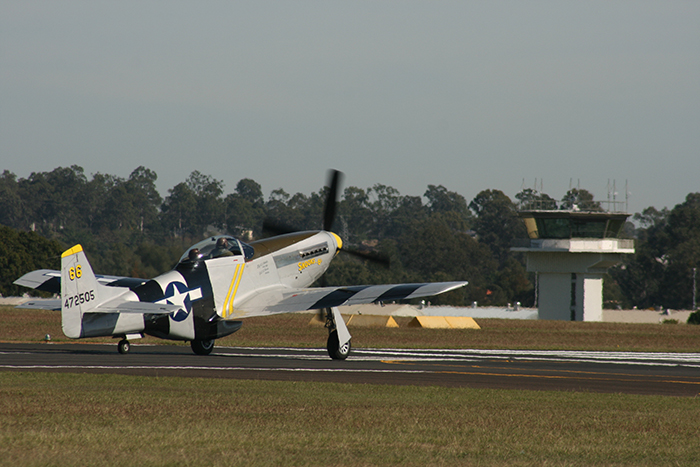 In 1934, Archerfield was the take-off point for the first west-east crossing of the Pacific by Sir Charles Kingsford Smith and Captain P.G. Taylor in the Lady Southern Cross, a single-engined Lockheed Altair monoplane.

The private company Archerfield Airport Corporation was established to control the airport in 1998 when the Federal Government privatised airport operations Australia-wide.

"Archerfield Airport Corporation (AAC) will not charge landing fees throughout the month of July.

"Through this gesture, AAC trusts that Free Fly July is a practical way to acknowledge the many years of co-operative partnership we have enjoyed with our airport community and a further contribution to promoting General Aviation in Queensland."

BRISBANE’s metropolitan airport, Archerfield, has been awarded the Corporate Project of the Year award by the Australian Airports Association (AAA) for its airspace optimisation project.

The AAA award recognises project innovation that provides major benefits to an airport’s operations. The Archerfield Airspace Optimisation Project was instigated by the management team at Archerfield Airport Corporation (AAC) and Keith Tonkin of Aviation Projects, who was engaged by AAC to implement the various project phases.

The project involved significant upgrading of the airport’s airspace and flight procedures, enabling more efficient and safer operation of all aircraft up to performance category C, flying at up to 140 knots. 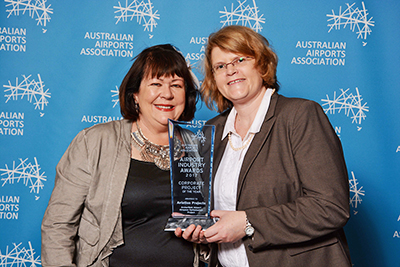 AAC general manager, Heather Mattes said the improvements would ensure that AAC meets increasing demand from operators of the larger, higher performance aircraft that currently operate from the airport.

“Archerfield Airport will be able to support aircraft operations under instrument meteorological conditions, 24 hours a day, before and after the commissioning of Brisbane Airport’s new parallel runway,” Ms Mattes said. “Improvements completed to date include new straight-in instrument approaches to runway 10L for up to performance category C aircraft, less restrictive standard instrument departure ceiling and visibility requirements, adding a broadcast capability to the automatic weather station and a webcam that live streams the current weather situation at the airport.”

Ms Mattes said the project continues to be rolled out in 2018.