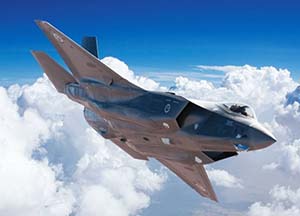 THE FIRST two Australian F-35 Joint Strike Fighters will be delivered in mid-2014, according to Lockheed Martin Aeronautics, and a further 100 remain on order.

The ‘initial operational capability’ readiness date for the RAAF is expected to be some time in 2020.

One of the last actions taken by the previous Labor Government’s Defence Department was to confirm its commitment to the F-35 Joint Strike Fighter – which gave a boost to its Australian component manufacturers.

“Along with the first two Australian jets in production, which will deliver in mid-2014, we will work closely with the government to support their purchase of their remaining 100 F-35 aircraft,” F-35 international communications manager Laurie Tortorello said.

“Additionally, we will work with Australian industry supporting their participation in the production of components and sub-assemblies for the more than 3,000 F-35s to be built during the life of the program.

“The projected $5.5 billion of industrial participation will bring long term economic benefits to Australia for decades.” 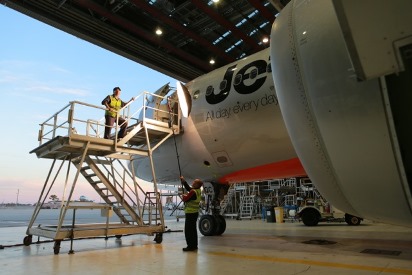 JOHN HOLLAND Aviation Services’ (JHAS) has begun progressively winding back operations at its Melbourne base due to current market conditions and is investigating the possible sale of its Tullamarine facility.

John Holland Group managing director, Glenn Palin, said the decision was consistent with the owning Leighton Group’s strategy to stabilise, rebase and then grow, a key element of which is the recycling of capital from non-core assets.

“After owning JHAS for seven years, we are focusing John Holland on our infrastructure, rail and specialist engineering capabilities,” Mr Palin said.

“We continue to perform well in our key domestic and international operations in tunnelling, water treatment and distribution, heavy marine structures, power transmission, rail and transport concessions. We have internationally recognised specialist engineering capabilities that we are exporting to a number of overseas markets.”

Mr Palin said early interest had been shown in the business.

“A number of potential purchasers have previously expressed interest in various parts of our business,” he said. “Any sale price realised is unlikely to be material to Leighton Holdings and we expect to exit the business by the middle of 2014.

“I would like to thank all employees of JHAS for their valuable contribution,” he added. 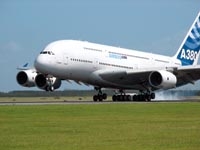 QUEENSLAND is already proclaiming it is open for business 24 hours a day, seven days a week with the latest Federal Government announcement that it will allow Brisbane Airport to retain unrestricted runway access.

Deputy Prime Minister and Minister for Infrastructure and Regional Development, Warren Truss made the announcement at the Tourism and Transport Forum Leadership Summit in Canberra last week, accepting the recommendation of the Brisbane Airport Curfew Review Steering Committee not to impose a curfew at the airport.

“It is not the disposition of this Australian Government to impose additional regulatory burdens on industry,” Mr Truss said.

“On the contrary, we have committed to reducing the red and green tape cost burdens on the Australian economy by $1 billion per year.

“Having considered all of the submissions, the overwhelming preference is for Queensland to stay open for business without impediments and, in this case, without airbrakes.

“The Queensland Government, local government and industry are united in opposing a curfew, which would have a significant impact on the economy of Brisbane and the state of Queensland.

“Despite neighbourhood environmental arguments in favour of a curfew, the government agrees with the Curfew Committee that night time restrictions at Brisbane Airport would not significantly mitigate aircraft noise impacts on Brisbane residents.

“The nearest house is more than 6km from the runway centreline, double the buffer around Melbourne Airport and 10 times the buffer of Sydney, Cairns, Adelaide and Coolangatta.

“Nevertheless, I have urged Brisbane Airport Corporation to continue its community consultation and noise management efforts, particularly in developing its 2014 Master Plan and in the lead up to the delivery of the new parallel runway.”