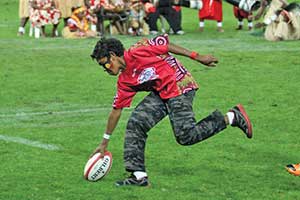 WHAT may have been missed in much of the sporting coverage  of the second annual rugby union Indigenous Round fixture on Saturday was that it marked the launch of support by mining giant, Rio Tinto, for Queensland Rugby's Future Indigenous Leaders program.

Queensland Rugby and Rio Tinto have designed the Queensland Reds Future Indigenous Leaders Program to create meaningful career pathways and leadership opportunities for young Aboriginal and Torres Strait Islander students throughout the state. Significantly, Rio Tinto is investing in the program at a time when the company has been under economic pressure, drawing back on its Australian mining investments and operations.

The program is a new initiative developed to provide the necessary mentoring support and incentives to help Indigenous students from Cherbourg and Woorabinda regions reach their potential and become leaders within their communities.

Rio Tinto Energy general manager for corporate relations said the program was an extension of the ongoing role the company was playing in assisting Indigenous and remote communities.

"Rio Tinto is proud to partner with Queensland Rugby Union in the Future Indigenous Leaders Program which supports and encourages teenagers in Cherbourg and Woorabinda to stay in school, seek employment and/or further training, and to become a leader in their community," Ms Smith said.

"We want to help talented Aboriginal students not only stay at school, but do the best they can."

The program is offered to students in years six to 10, and the early stages focus on developing literacy and numeracy skills before the focus shifts gradually away from the curriculum and towards developing the students' leadership abilities.

Queensland Rugby and Rio Tinto continue to work in partnership with local schools and youth organisations to encourage, support and reward students involved in the program who are demonstrating consistency in attendance, improvement in learning, and excellence in performance both inside and outside of the classroom.

Queensland Rugby CEO Jim Carmichael welcomed the partnership with Rio Tinto and the launch of the Future Indigenous Leaders Program.

"To partner with a global mining sector leader such as Rio Tinto is extremely significant to driving positive outcomes for our code and will create huge benefits for our participants, communities and partners associated with the Queensland Reds Indigenous Program," Mr Carmichael said.

"To continue the growth of Rugby in Queensland it's critical that we are surrounding ourselves with like-minded partners committed to investing in our game, so it's with great pleasure that I welcome Rio Tinto into the Queensland Rugby family."

"It's important to never underestimate the impact strong leadership can have on others, whether that is on the rugby field or in your everyday commitments in life," Mr Horwill said.

"But, like any other skill, leadership is something you need to work hard at developing and it's therefore extremely pleasing to see the creation of a program that will provide participants with the necessary knowledge and tools to become leaders within their communities." 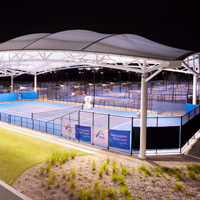 BRISBANE, FEBRUARY 2, 2012 - The just completed Brisbane International tennis tournament has won the backing of the Queensland Government, through its Events Queensland arm, for a further four years.

Acting Premier Andrew Fraser confirmed the State Government would help drive the tournament for another four years, saying this year's event had been a resounding success and reinforced its status as a "must-see event on the Queensland sporting calendar".

"The 2012 tournament has been exceeding all expectations with record crowds and some of the world's best tennis talent taking to the courts," Mr Fraser said.

"Only a year ago, the Queensland Tennis Centre (at Tennyson on the Brisbane River) was impacted by the floods and this week the tournament has been back bigger and better than ever - with an upgraded women's tournament and an impressive international men's field.

"Today's confirmation that we will continue this heightened investment for another four years means the tournament can grow even further into the future, delivering for local and visiting tennis fans alike."

Mr Fraser said last year's tournament, which finished just before the flood peak, still generated an economic boost for the city and more than 67,000 spectators attended.

"Events like this help build resilience in the Queensland tourism industry, attract visitors from interstate and overseas and give a boost to the local economy, businesses and jobs," Mr Fraser said.

"Investing in world class events like the Brisbane International is part of our plan to continue building Queensland's bright future.

"That is why the Queensland Government has increased our investment in events by $83million over four years, bringing the total Events Queensland budget to $174million over the same period."

In 2011, the Queensland Government, through Events Queensland, secured an international bid for an upgrade to the Brisbane International to a Women's Tennis Association (WTA) 'Premier Event'.

The upgrade allows unlimited participation by the world's top tennis players and will deliver the biggest prize pool in Australian tennis outside the Australian Open. It means the prize purse will increase from $655,000 in 2012 to $1million in 2013.

"The event has experienced phenomenal growth over its short history and it has gained a reputation with the players as one of the best events on the tennis calendar. A lot of this has been due to the support of Events Queensland."

Events Queensland CEO John O'Sullivan said the investment in marquee sporting events in Brisbane was complemented by a heightened investment in arts and cultural events.

"Events have a proven track record of delivering a strong return on investment, driving visitation and promoting Brisbane as a destination,"  Mr O'Sullivan said.

"The Brisbane International, combined with other events like Matisse: Drawing Life and Mary Poppins promote the city as an events destination during the holiday period. This is great start to the 2012 calendar - a year which promises to deliver a number of significant sporting, arts and cultural, and business events for Brisbane."

The extra investment in the Brisbane International comes in addition to other upcoming events like the Queensland International Performance Series, Portrait of Spain: Masterpieces from the Prado, 34th International Geological Congress, World Theatre Festival, Mummy: Secrets of the Tomb, the Rugby Union Castrol Edge Welsh Tour and in 2013 the Rugby Union Lions Tour.

Ipswich revels in the business of revs

The Ipswich V8 Supercar race at Queensland Raceway, part of the complex that also hosts the famed Winternationals drag racing championships, is a growing economic phenomenon for Ipswich.

It is also a phenomenon for the grass roots appeal it has for both fans and drivers. In fact just a few weeks ago leading V8 Supercar drivers Mark Winterbottom, Jonathon Webb, Tim Slade and Jack Perkins returned to their grass roots to promote the event, getting their eye in for the Coates Hire Ipswich 300 by returning to where it all began - a race day at the Ipswich Kart Club, which is also part of the motor racing complex.

The four 'young guns' of V8 Supercars joined Member for Ipswich West Wayne Wendt and Ipswich Deputy Mayor Victor Attwood for a Kart Challenge against each-other and a celebrity race.

"Karting is where almost all of us began our careers so its great to be able to show other people just how great the sport is, how much fun it is for kids and where they may be able to take a career," Mr Winterbottom said.

Mark Winterbottom, running fifth in the championship, has had mixed success at Queensland Raceway in previous years but his Orrcon Steel FPR Falcon is beginning to fire in 2011 and he is anxious for a second win at the Queensland Raceway track nicknamed the ‘paperclip'.

"We have turned a corner in Townsville a few weeks ago which has been really heartening for the team," Mr Winterbottom said of his second and third at the Sucrogen Townsville 400 when he and team-mate Will Davison impressed.

"Queensland Raceway has been interesting in recent years in that the ‘home' teams have not had so much success compared to the Victorian-based teams. I won their in 2008 and was on pole in 2009 so it's a track that we have done well at."

Mr Wendt said it was great to have the four in Ipswich early ahead of the biggest annual event in the region and an important boost for the economy.

"It's been a very testing time for Ipswich which is still recovering from the devastation from earlier this year so it's great to bring something back to the people," Mr Wendt said.

"This event will give local businesses and the community some faith and a real boost for the next three years, and is integral to the government's major events strategy for the whole state."

Deputy Mayor Attwood said the community was proud of the Coates Hire Ipswich 300 as one of its marquee events annually that the region supported with its feet.

"It's a tremendous community event that the whole region supports and one that helps bring more jobs to the region by injecting much needed funds and national profile," Cr Attwood said. "Millions will see Ipswich in the spotlight on the race weekend which gives great profile to one of the fastest growing regions in the country."

The 2011 Ipswich 300 also features the first South East Queensland appearance of Disney Pixar's CARS Truck Tour 2011, one of the stars on the about to be released Cars2 movie.

The Disney Pixar's CARS Truck Tour 2011 themed installation features a number of entertainment zones and themed activity stations, providing a whole new level of synergy between the CARS universe and the real world.

Adding to the excitement of the Disney appearance at the Ipswich 300 is that kids under 12 are free with a paying adult when they attend the event.