AUSTRALIA’s population is ageing.  Older Australians are a growing proportion of the total population, year-on-year. For business leaders, it is important to understand the ramifications.

According to the Federal Government’s Australia’s Ageing Population Report, released in 2019, the growth in the proportion of older Australians is partly due to an increase in life expectancy.

The Parliamentary Budget Office recently issued its Australia’s Ageing Population Report for 2019, subtitled Understanding the Fiscal Impacts Over the Next Decade 02/2019. In it, the government addresses the effect an ageing population has on the Federal Budget.

While an ageing population is a slow process, it does represent a rise in financial costs over time. Additionally, it can – and certainly does for Australia – represent a reduction in workforce participation rates.

WHO IS WORKING, WHO IS NOT?

Workforce participation rate represents the section of working population, aged between 15 and 65, in the Australian economy currently employed or seeking employment. Essentially, it refers to the total number of people or individuals working right now or in active search of a job.

Australia is currently going through a particularly significant phase of demographic change. The ratio of aged dependents to working labour participants continues to trend closer and closer to a smaller ratio.

In simple terms, this means there are fewer and fewer workers over time to contribute to the economy. The movement of the baby boomer generation to retirement age is already reducing labor force participation and increasing the take-up of the Age Pension. In 1975, the ratio of workers to aged dependents was almost 7:1. Today it is around 4.5:1 and the Parliamentary Budget Office projects this ratio to fall to around 2.5:1 by 2055.

This double-edged sword, consisting of an increase in spending (such as greater Age Pension spending) and a decrease in national tax revenue (primarily reduced income tax collection) means a hefty level of pressure on the economy and those working.

The rising number of dependent aged citizens in Australia require publicly funded services such as accommodation, health care, social service payments and transportation. The economy may end up struggling to provide these goods and services in sufficient measure.

The economy may also struggle to find skilled labour for roles or jobs within the aged care sector, such as nursing or other medical jobs. Such a reduced available labour market may further raise wages, leading to an increased cost of living for the elderly and, thus, a greater pressure on taxpayers.

Australia’s Federal Government has an ever slowly approaching issue on its hands. 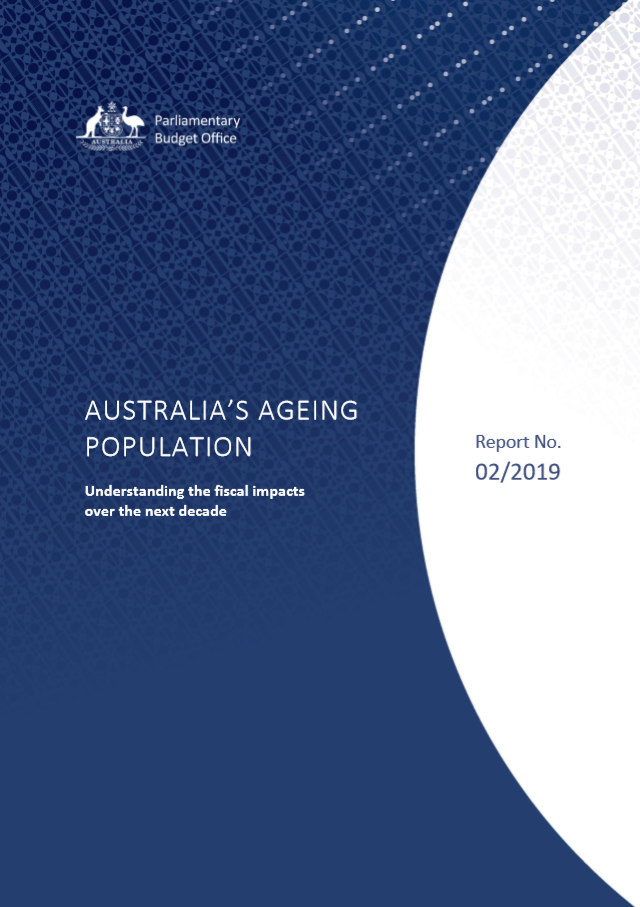 There are a number of options to consider or strategies to implement to try to address the issue, some of which have already been put into effect to some extent.

In short, some of the key fiscal strategies available include:

The Federal Government’s 2015 Intergenerational Report presented the impact of the ageing population over the next 40 years (from 2015).

This Parliamentary Budget Office (PBO) report uses a broadly comparable approach to quantify the impact of demographic change on the federal fiscal budget over coming years.

There are difficult choices to make for the current government and those future governments that follow.

With an already existing strain on health resources and the hospital system, Australia will need to find a way to balance those citizens working against those that have moved into retirement.