SCREEN Australia has announced a new Australian-Chinese co-production feature At Last, making it the eighth official co-production to receive approval.

The announcement was made at a screen industry networking event in Beijing recently, in partnership with Ausfilm and the Department of Foreign Affairs and Trade. The event was designed to further energise Australian-Chinese working relationships and identify co-production opportunities with Chinese producers and production companies. 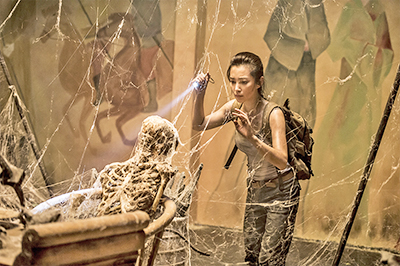 Stand-alone private enterprises were also present, including production house Sydney Films which intends to identify 20 existing or potential co-production films with a total investment budget of A$400 million (¥2 billion*).

“We have seen increased interest in Australian-Chinese co-productions with At Last being the fourth feature announced since late 2015,” Screen Australia’s head of business and audience, Richard Harris said.

“This upswing in activity is the result of seven years of engagement with the Chinese screen industry and the sustained support of the State Administration of Press, Publication, Radio, Film and Television in China.

“China is currently the world’s second-largest movie-going market and co-productions are an essential growth stream for the Australian industry, this is over and above the existing appetite for Chinese television and film productions being shot in Australia.”

Ausfilm CEO Debra Richards said, “We have been building the Australia China Film Industry Exchange in partnership with Screen Australia and the Australian Embassy in Beijing for the last seven years. And more recently Ausfilm and its members, with the support of the Embassy have brought an annual delegation of Chinese filmmakers to Australia to see the locations; the state-of-the-art facilities, studios and services; and to meet with Australia’s world renowned technicians, crew and talent - essentially to experience all that Australia has to offer.

“Bleeding Steel, which filmed in Sydney and starring Jackie Chan, is one such outcome of this ongoing relationship.”

The latest co-production At Last is the story of a couple from Beijing who find themselves caught in a complex art heist while on holiday in Australia. The feature will be written and directed by Yiwei Liu and produced by Jackie Jiao, Todd Fellman, Charles Fan and Vanessa Wu, from China's Monumental Films, Australia’s Roadman Films and Story Bridge Films.

Casting is currently underway with production expected to commence in Australia from mid-July. Financing will be provided by Orient Image Entertainment, Gravity Films, Shineland Media, China Lion and Screen Queensland.

“At Last has come to Queensland as a direct result of the Queensland Government’s $30 million screen industry funding injection over four years,” Ms Vieira said.

“The film will showcase a range of Queensland locations and will be the setting for this film which has the potential to grow tourism from China into our state,” Ms Vieira said. “Queensland producers have been working extensively to build relationships with Chinese producers and it is fantastic to see another official co-production in our State.”

At Last is the eighth Australian-Chinese co-production announced since the official treaty was put in place in 2008, and joins a growing list which includes Guardians of the Tomb starring Li Bingbing from writer/director Kimble Rendall (Bait 3D) currently in post-production; and two additional features My Extraordinary Wedding and Tying the Knot which are yet to commence production.

Australian films are also regularly selected for Chinese film festivals, including The Death and Life of Otto Bloom, which was shortlisted for the prestigious Tiantan Award at the 2017 Beijing International Film Festival in April.

The upcoming production Butterflies Across the Sea will be one of the biggest budget Chinese television series to ever have been filmed outside of China and joins Speed which recently wrapped filming in South Australia.

The number of Chinese films released in Australian cinemas is also increasing. There were  30 releases in 2015 compared to 13 releases in 2014. The 2016 hit The Mermaid  achieved A$1.3 Million (¥6.7 million) at the Australian box office.

Australia’s Ambassador to China Jan Adams  said, “The Australian Embassy proudly supports Screen Australia, Ausfilm and the Australian screen industry. Our work together delivers public diplomacy and economic diplomacy benefits by highlighting Australian creative excellence, deepening cultural understanding and delivering business opportunities in a fast growing market. 2017 is the Australia China Year of Tourism and marks the 45th anniversary of diplomatic relations. It is a great time to be making co-productions.”