FIVE BUSINESS leaders have been recognised with Creative Partnerships Awards to mark their philanthropic contributions to developing the arts in Australia.

The Creative Partnerships Awards, presented in March at Sydney’s Museum of Contemporary Art, recognised those who have fostered enduring partnerships between the cultural and private sectors and encouraged the spirit of giving to the arts. 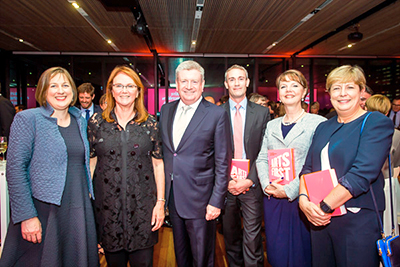 Creative Partnerships Australia chief executive Fiona Menzies said the awards embraced the legacy of the former Australia Business Arts Foundation Awards, which celebrated excellence in partnerships and private sector support for the arts for more than a decade.

Private support for the arts has almost doubled in the past 10 years, she said, increasing by 98 percent to $221 million. Private support now accounts for 10 percent of all arts funding in Australia, with cultural and creative activity contributing $86 billion or 6.9 percent to the country’s Gross Domestic Product (GDP) every year.

Arts Minister Mitch Fifield said, “They are inspirational leaders whose achievements exemplify the benefits of strong, mutual partnerships between the artistic and private sectors. I thank each of the winners for their exceptional contributions to Australia’s cultural life.”

Ms  Menzies said this year’s award winners had demonstrated commitment to the arts, and displayed leadership in their advocacy for supporting the arts to create a strong, sustainable future for Australia’s cultural sector.

“Each of these leaders is committed to championing giving to the arts and promoting the value of supporting the arts to the broader community. I congratulate all our Award winners and know that they will continue to inspire others to engage with and support artists and arts organisations,” she said.

Previous Leadership Award winners were invited to nominate individuals for this year’s Awards, with winners determined by the Creative Partnerships Australia Board.

Peter Wilson – Emerging Philanthropy Leadership Award: Sydney’s Peter Wilson is the managing director of Greenhill Australia and chair of Playwriting Australia, the peak national body supporting new writing for theatre. A director of Belvoir St Theatre and a member of the finance council of the Sisters of the Good Samaritan of the Order of St Benedict, Mr Wilson has held board positions with numerous other community organisations. In 2010, he and his family supported Jane Bodie’s This Year’s Ashes in a co-commission with Griffin Theatre. Playwriting Australia’s donor co-commissioning program has three further projects under development through with Belvoir St, Griffin Theatre and Sydney Theatre Company.

Julieanne Alroe, Richard Goyder (joint winners) – Business Arts Leadership Award: Julieanne Alroe is CEO and managing director of Brisbane Airport Corporation. Under her direction the company has developed partnerships with several arts organisations including Queensland Ballet, Brisbane Writer’s Festival, La Boite Theatre and Camerata of St John’s. She recently initiated the Artist in Residence program at Brisbane Airport appointing artist Robert Brownhall. The airport boasts one of the country’s largest collections of public art with more than 100 pieces valued at more than $10 million commissioned or acquired by the airport to date and displayed throughout the precinct. Since Ms Alroe’s appointment in 2009, Brisbane Airport has also won numerous awards, including the 2014 Skytrax World Airport Awards third place ranking for airports servicing 20-30 million passengers. Ms Alroe was named Business Person of the Year at the 2014 Lord Mayor’s Business Awards. She is currently overseeing the $1.3 billion parallel runway project, one of the biggest infrastructure projects in Australia.

Perth’s Richard Goyder, AO, is managing director of Wesfarmers. He holds several board positions and is a director of the Business Council of Australia. He was made an Officer of the Order of Australia in 2013 for distinguished service to business through executive roles and corporate sponsorship of the arts and Indigenous programs. As Wesfarmers CEO Mr Goyder has forged numerous high profile and long-time arts partnerships, including a $1.2 million fellowship scheme with the National Gallery of Australia to boost Indigenous arts leadership. Wesfarmers supports bodies including the Art Gallery of Western Australia, the West Australian Ballet, Bell Shakespeare Company and the Perth International Arts Festival.

Mary Jo Capps – Arts Leadership Award: Sydney’s Mary Jo Capps has worked in the Australian cultural industry for more than 30 years. She is CEO of Australia’s oldest independent professional performing arts organisation, Musica Viva, and is particularly concerned with arts education, both live and digital, and providing professional development for emerging musicians, composers, classroom music teachers and arts administrators. She holds several board positions including chair of the advisory board of the faculty of the VCA and Melbourne Conservatorium of Music, University of Melbourne. For the past decade Ms Capps has worked towards broadening access to and understanding of fine music in Australia.

Naomi Milgrom AO –  Philanthropy Leadership Award: Naomi Milgrom is the Melbourne-based owner, executive chair and CEO of the Sussan Group comprising fashion brands Sussan, Suzanne Grae and Sportsgirl. She has been recognised as one of Australia’s top 25 business leaders and played a pivotal role in promoting Australian retail and fashion industries to the world. She is a passionate supporter of the arts and has shaped landmark alliances between local and global partners. She recently established the Naomi Milgrom Foundation to initiate bold public art, design and architecture projects including Melbourne’s MPavilion. She was recently appointed as commissioner for the Australian representation at the 57th International Art Exhibition, Venice Biennale 2017.