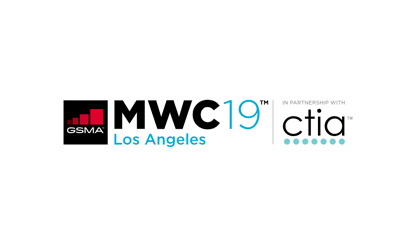 “The mobile industry touches the lives of billions of people around the world, and with the arrival of 5G, it is once again changing consumer behavior and business models across the globe,” said John Hoffman, CEO, GSMA. “MWC19 Los Angeles will showcase a range of transformative use cases of the latest mobile technology across the industry’s vast ecosystem and adjacent sectors, exploring today’s new possibilities.”

The GSMA announced the first global leaders to keynote as part of MWC19 Los Angeles’ three-day conference program including:

In addition to the keynote program, the MWC19 Los Angeles conference will offer 27 track sessions on transformational technologies under the four main themes of 5G, IoT, AI and Immersive Content. Topic breakouts include:

Executives and industry experts confirmed to speak in the conference sessions include:

The 4YFN (Four Years from Now) startup event will span the three-day show and focus on the technology industry’s biggest growth areas of connectivity, media and entertainment, artificial intelligence and Tech4Good, addressing social impact and diversity. The startup event brings together innovative companies and investors, to facilitate future joint ventures and partnerships. A key highlight of the event is the 4YFN Los Angeles Awards, where five finalist startups will compete for the recognition in front of judges and an attendee audience.

The MWC19 Los Angeles Women4Tech Summit, designed to address and reduce the persistent gender gap in the mobile industry, will showcase the companies and best practices that are making gender diversity a business imperative. Women4Tech session topics include the future of female leaders in the U.S.; how to inspire girls and women to join STEM careers; and female entrepreneurship, among others.

The first confirmed Women4Tech speakers include executives from major brands including:

MWC19 Los Angeles partner programs will offer a broad agenda of learning and networking sessions for attendees across the three days of the show. Partner programs include The Besen Group, Blancco, CBRS, Conduent, Fierce Wireless, Light Reading, Netcracker, Sinch and TIA, while mGage and Netcomm Wireless will present Power Hour sessions. A total of 10 IoT and 5G Talks are confirmed for MWC19 Los Angeles. Today, the GSMA also announced James Brehm as an Affiliate Partner and Award Solutions as the Technology Training Partner.

The GSMA today announced Grant Imahara, well known for his work on the hit Discovery series MythBusters and Netflix series White Rabbit Project, will serve as the championship event’s master of ceremonies, providing commentary alongside DARPA and industry experts. Imahara will guide the audience through several stages of the competition, culminating in the high-energy final match-up between top teams to determine the recipient of the $2 million grand prize. The SC2 finale is free to attend and open to all MWC19 Los Angeles attendees as well as the general public. Registration for this featured event will open in July.

For more information on SC2, including DARPA on site at MWC19 Los Angeles visit: www.SpectrumCollaborationChallenge.com/.

Get Involved at MWC19 Los Angeles

More information on MWC19 Los Angeles, including how to attend, exhibit or sponsor, is available at www.mwclosangeles.com. Follow developments and updates on MWC on Twitter @GSMAEvents using #MWC19, on our LinkedIn MWC page https://www.linkedin.com/showcase/mwclosangeles/ and on Facebook at https://www.facebook.com/MWCLosAngeles/.

The GSMA represents the interests of mobile operators worldwide, uniting more than 750 operators with over 350 companies in the broader mobile ecosystem, including handset and device makers, software companies, equipment providers and internet companies, as well as organisations in adjacent industry sectors. The GSMA also produces the industry-leading MWC events held annually in Barcelona, Los Angeles and Shanghai, as well as the Mobile 360 Series of regional conferences.

CTIA® (www.ctia.org) represents the U.S. wireless communications industry and the companies throughout the mobile ecosystem that enable Americans to lead a 21st century connected life. The association’s members include wireless carriers, device manufacturers, suppliers as well as apps and content companies. CTIA vigorously advocates at all levels of government for policies that foster continued wireless innovation and investment. The association also coordinates the industry’s voluntary best practices, hosts educational events that promote the wireless industry and co-produces the industry’s leading wireless tradeshow. CTIA was founded in 1984 and is based in Washington, D.C.