THE MUR group of companies is developing a multi-award-winning smart city, Springfield, just outside of Brisbane.

It has been on this journey for 30 years and Springfield is today classified as a city, having started out as a 3000 hectare parcel of bush land. It has been converted from a timber and forestry operation with a population of one, the caretaker, to an emerging city on the edge of Brisbane with a population of almost 50,000 people.

This is an unusual project. Usually governments run these types of developments, but Springfield is the vision of, and is being managed by, a private developer whose figurehead is the visionary Maha Sinnathamby, MUR founder and chairman of Springfield City Group.

The first move was to build the residential component but Bob Sharpless, the managing director of the MUR Group and deputy chairman of the Springfield City Group said it was realised early on that things had to be done differently.

Springfield City aimed to create employment, with one job for every three people, and to do this, it had to identify the business themes that would create future employment. These included education with 11 schools, a university and a TAFE and lots of childcare centres for a young population with an average age of 29.

There are more than three children per household in Springfield. 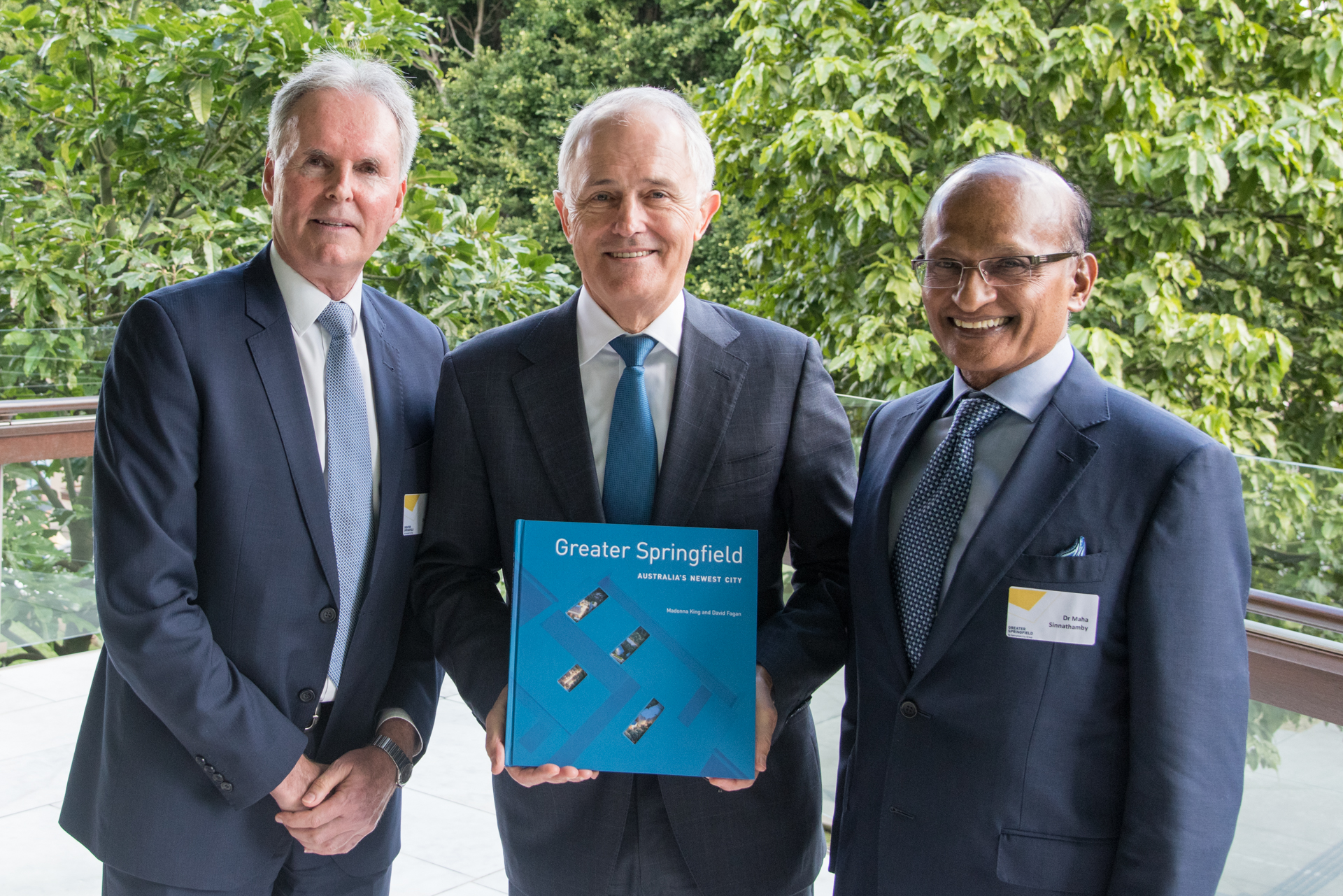 There is a focus on health at Springfield, with a component of the project called Health City involving public and private health provision. There is also the traditional shopping precinct called Orion Centre which includes Coles, Woolworths and K-mart.

The smart city has also developed strongly in the information technology (IT) space with the Polaris Data Centre and dark fibre connecting Springfield back into Brisbane.

“We’ve reticulated fibre through the community a long time before NBN was a requirement,” Mr Sharpless told Talking Business.

“And increasingly, we’ve started to play in the energy space where we are working with a French company, Engie, to achieve a zero net energy position by 2038.

“They are just a few of the themes we have identified,” Mr Sharpless said.

“What we’re trying to do is attract businesses that can be located in Springfield that will create the future jobs for the people that either live here or can commute here in a pretty efficient way.”

As part of the development, Springfield is also working with major corporations such as Mirvac and Lend Lease.

“We knew very early on that we couldn’t do everything and we didn’t have the expertise to do everything, so we’ve tended to adopt a model where we play the role of ‘master developer’ and we have a number of long-term partnerships with the organisations,” Mr Sharpless said.

“We work collaboratively with them for them to develop in accordance with out master plan.

“We give people the opportunity to develop our land under a sub-development arrangement and we share, sometimes, the provision of infrastructure which is required for the land that they’re developing together with other parts of the project that we’re developing.”

Springfield also enters into royalty arrangements in which it takes a percentage of the sale price of the development.

Springfield is also promoting environmental sustainability. A third of the total land area has been retained for open space and conservation.

Usually, in projects of this nature, that figure would be about 10 percent. So this is a city considering its local habitat along the way.

Springfield aims to be a lot more efficient than other city and suburban areas in terms of energy. It is, in fact, the suburb in Queensland with the highest penetration of solar panels.

“We tend to be ahead of the curve,” Mr Sharpless said. “We look at ways of creating more uniqueness within our project. Our green credentials, our ability to put in high quality energy and telecommunications infrastructure has certainly been something that set us apart from other large residential projects

“And we have been doing it for a long time. Over 20 years ago, we were working with Apple to put computers into a school here and then testing the levels of numeracy and literacy that the students were achieving as a result of having that type of technology in the school.

“You’d laugh at it now and thinks it’s rudimentary but back then it was the novel thing to do,” he said.

“We also had Optus in there with an intranet and we were giving free computers to everyone who bought a block of land here to build a house.”