UNIVERSITY of Queensland chemical engineering and business graduate, Alex Bell, may have started a revolution in Australian rum distillation with the creation of a ‘four-in-one’ liquor still.

Hoping to reinvigorate Australia’s passion for rum, Mr Bell has combined his engineering and business nous to create a new kind of micro distillery capable of producing a range of spirits including rum – superseding traditional stills that are usually limited to a single product.

“The distillery consists of a single still that performs the same function as four dedicated stills and is capable of producing several thousand bottles a year of a variety of marques and spirits,” Mr Bell said. 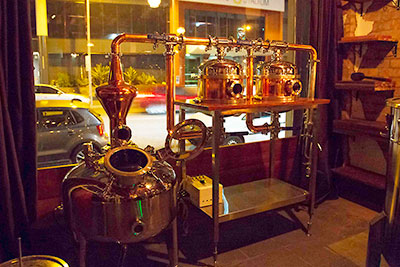 “The distillery has been designed with versatility in mind, while minimising its size.

“It’s essentially four-stills-in-one: a dual retort Jamaican rum still for producing heavy rums; a column still for producing light rums; a regular pot still for brandies and traditional rums, and a gin still that will be using to create a range of spiced rums and aperitifs.”

Mr Bell said his system allowed for each product to be designed from scratch and able to be reproduced exactly, no matter the scale.

“This is achieved by directing the flow of vapour via several valves,” he said.

“Each fermenter is temperature controlled, allowing full precision of fermentation temperatures to allow for consistency between batches, but also to encourage the microorganisms to produce the desired compounds at the right time.

“The distillery also has the ability to produce our own ginger beers without affecting production volumes of spirits.

"All the design work and problem solving involved in the distillery was a direct result of the tool set the engineering degree provided me,” Mr Bell said.

The Brisbane-based entrepreneur’s revolutionary idea was nurtured and developed through UQ Idea Hub, a startup pre-incubator for aspiring entrepreneurs.

“The UQ Idea Hub also gave me the opportunity to bounce my ideas around a vast number of experienced people from a range of industries, which helped continually refine my idea,” Mr Bell said.

“In 2017, I participated in the Shanghai Startup Adventure, a UQ Idea Hub program that provides students a one-month internship in Shanghai, and this was one of the greatest experiences I’ve ever had.

“I learnt how hard and fast you have to work in a startup.”

The new micro-distillery is operating at The Malecón Bar in Milton, Brisbane. Mr Bell plans to expand the business in the future.