THE Brisbane Broncos are used to winning on the rugby league field, but this year they came up trumps in the field of business, taking out the Corporate Citizenship Award in the Brisbane Lord Mayor’s business Awards.

Brisbane Broncos received the coveted Clayton Utz Award for Corporate Citizenship in front of a capacity crowd at Brisbane City Hall on October 30. It was an unusual honour for the Broncos, being recognised by Lord Mayor Graham Quirk for the club’s devotion to the betterment of the Brisbane community. 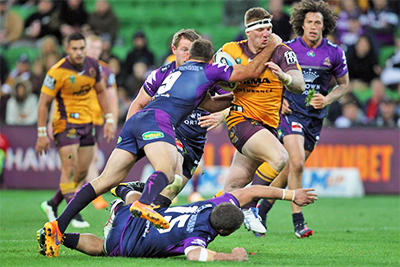 The Brisbane Broncos’ recognition was part of the annual celebration of local businesses and individuals who contributed to Brisbane’s $146 billion economy and the community, Cr Quirk said.

“The Brisbane Broncos go beyond just being a football club and are an integral part of the Brisbane community,” Cr Quirk said.

“They were recognised for their various corporate citizenship initiatives that they have carried out in the community, especially their charity programs such as Brisbane Broncos Charity Fund and Beyond the Broncos Program.

“The Broncos continue to align themselves with their core values, going above and beyond for not only the external community, but for their staff and members.”

Don Meij from Domino’s Pizza Enterprises also reigned supreme at the awards this year, receiving Channel 7’s Business Person of the Year Award, especially acknowledging his drive that has taken the brand international from its Brisbane headquarters.

“Don has been with Domino’s since 1987, when he was 17, and has grown with the company, maintaining continuous commitment to innovation, food-quality improvement and giving back to the Brisbane community.”

Cook Medical Australia, the world’s largest privately-owned medical device company, was also recognised for its unprecedented success in expanding into the Asian market with the HSBC Award for Doing Business in Asia.

Cr Quirk said that this year marked a significant milestone for the Lord Mayor’s Business Awards, as they celebrated their 10th anniversary.

“Over the past decade we have witnessed exciting growth and transformation in Brisbane as it has become the city of choice for business, investment, study, conventions and leisure in the Asia Pacific,” Cr Quirk said.

“As Australia’s new world city, Brisbane is home to a dynamic and entrepreneurial business community, whose members we are proud to recognise at the awards tonight.