RIVER CITY LABS is now seeking submissions for the next RiverPitch event on May 17 – where investment-ready ‘tech entrepreneurs’ pitch to a pre-screened selection of Australia’s leading investors.

A River City Labs CEO Peta Ellis spokesperson said applications would remain open until April 15 for the next RiverPitch being staged at the Royal International Convention Centre at Bowen Hills, Brisbane. 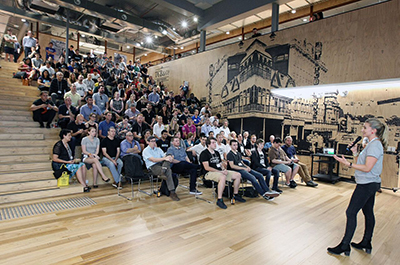 Ms Ellis said it was the biggest venue yet “and a sign of how the event has grown since its first edition in November 2012”.

RiverPitch seeks to reconceptualise how investors and members of the startup mobile-web-internet community might meet and form mutually beneficial relationships. RiverPitch differentiates itself from Angel Investment groups by having no formal requirements for how investment may occur.

As River City Labs founder and Ten’s Shark Tank investor Steve Baxter is fond of saying, RiverPitch exists “to bring two parties together in a social setting to potentially have a million-dollar conversation”.

Applicants are asked to submit a short form and 90-second video via the F6S online platform. Submissions are reviewed by a committee of RiverPitch members, who will invite the top 10-15 applicants for an interview at River CityLabs the following week. Up to six finalists will then be selected, who will attend a series of practice sessions in the lead-up to the May 17 event.

Ms Ellis said RiverPitch was the next phase in River City Labs’ goal of placing Brisbane at the forefront of a technology boom in Australia. Trading off River City Labs’ nationally recognised brand-name in the start-up sector, and with sponsorship from McCullough Robertson and Morgans, RiverPitch’s goal is no less grand than to “change the way investing is done in Brisbane.”

Past alumni of RiverPitch include Audeara, the ‘world’s first full fidelity headphones, designed by doctors and engineers’ which has garnered rave reviews on Boss Hunting and the Australian Financial Review; and SiteSee, which uses drone footage and machine learning to map, manage and analyse critical infrastructure projects.

Selected applicants will pitch at Startup Invest which is being staged in conjunction with the Myriad Festival – now Brisbane’s biggest annual startup festival.

Startups can apply through the F6s portal: http://F6s.com/riverpitch2018/about

River City Labs has fostered the growth of startup companies wanting to solve big problems since 2012 in Brisbane. It provides resources to empower, support and connect entrepreneurs.

“Central to everything we do is a focus on collaboration and connection,” CEO Peta Ellis said. “Since 2012 over 460 entrepreneurs have called RCL home. Through our events program we have welcomed more than 16,000 guests into our community by hosting over 500 events aimed at supporting founders on their entrepreneurship journey.

River City Labs powers a range of programs, events and engagement opportunities, enabling corporate partners to innovate differently and embed their teams within the start-up community. Recent partnerships in the financial technology sphere include sponsorship and collaborations with BOQ and CUA.