THE FIRST first national program designed to encourage consumers to shop for fresh produce at their local independent retailer aims to unite the fruit and vegetable industry and reward consumer loyalty.

A Better Choice program is a  joint initiative by Fresh Markets Australia (FMA) and the Central Markets Association of Australia (CMAA). The bodies are working in alliance with industry partners on branding and co-promotional activities. 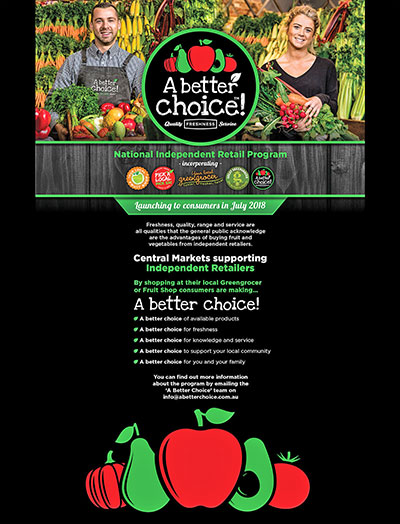 The program supports 500 independent fruit and vegetable retailers nationally, who supply more than half of the fresh produce sold across Australia, by engaging consumers and highlighting the benefits of shopping at independent retailers.

“A Better Choice offers retailers the opportunity to come together and share the benefits of a national marketing strategy to shape a positive future for independent retailers, the central markets and local farmers who supply them,” Mr Schnitzler said.

“This program has been developed following in-depth research and feasibility studies to learn more about consumers’ shopping habits and what matters most to them when it comes to purchasing fruit and vegetables.”

A national consumer sentiment survey found the key motivators for consumers to shop at their independent retailer were the freshness of produce (92%), supporting a local business (90%), and trust in the quality of the produce (86%).

However, more than 88 percent of people surveyed still chose to shop at supermarkets due to the perceived convenience.

“Whether it’s in the form of social media, flyers or in-store activities, our message to consumers is that when you see the ‘A Better Choice’ logo you can be assured that you are buying only the freshest produce that has been grown right here in Australia,” Mr Schnitzler said.

FMA works alongside the Central Market System which is made up of over 15,000 growers, supplying wholesalers in the major marketing and distribution hubs in Brisbane, Sydney, Melbourne, Adelaide, Perth and Newcastle.

Mr Schnitzler said the Central Markets were connected to every link in the supply chain and provided the critical connection between growers and consumers to bring the freshest produce to Australian tables.

“Better Choice is really just that, a better choice for retailers, consumers and the industry. Australian growers produce excellent quality fresh produce and the A Better Choice program will help to highlight to consumers how they can better support local fresh produce growers and independent retailers,” Mr Young said.

A Better Choice was launched at Hort Connections, the annual industry conference and trade show for buyers and sellers from every segment of Australia’s fresh produce and floral supply chain, in June.

The Central Markets Association of Australia (CMAA) was formed in 2001 to provide a peak body for the six wholesale central markets around Australia. Collectively, these wholesale central markets supply over 4 million tonnes of fresh produce each year, worth an estimated wholesale value of $7 billion. CMAA members include the Adelaide Produce Market, Brisbane Markets, Market City in Western Australia, the Melbourne Market, Newcastle Market and the Sydney Markets.

E-mail:  This email address is being protected from spambots. You need JavaScript enabled to view it.