CSIRO has created a ‘blueprint’ for how Australian manufacturers can survive and prosper, despite many industries facing an uncertain national and international future.

The Advanced Manufacturing Roadmap, which was written by CSIRO in collaboration with industry, government and researchers, identifies major growth opportunities and what manufacturers need to do to achieve them. 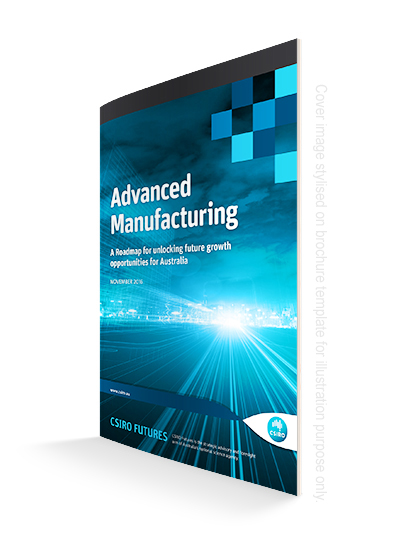 “Whether it's 3D printed sternums to save lives, or 3D paper weaving to help Australian SMEs break into global value chains – or as the great (World War One Prime Minister) Billy Hughes said ‘science will guide the manufacturer into greener pastures’.”

He said over the next 20 years, Australia’s manufacturing industry “must evolve into a highly integrated, collaborative and export-focused environment that provides high-value solutions”.

The sector should focus on pre-production activities such as design, research and development; as well as value-adding services, sustainable manufacturing and low volume/high margin customised products.

“The industrial landscape is changing fast. We need to start evolving with it,” Dr McLean said.

“Australian manufacturers must transform their businesses by investing in new knowledge, skills and practices.”

The Advanced Manufacturing Roadmap calls on Australia’s research and manufacturing sectors to increase their collaboration and alignment with each other.

“Industry needs to lead this transformation. CSIRO has the expertise, experience and business network to help guide them,” Dr McLean said.

The Advanced Manufacturing Roadmap is the first in a series of Roadmaps being produced by CSIRO, each aligned to the Federal Government’s Industry Growth Centres.

The Advanced Manufacturing Roadmap can be downloaded from the CSIRO website.

THE Australian team which created the world-first 3D-printed jet engine has launched a new venture to manufacture components for a leading French aerospace company.

Melbourne-based start-up Amaero Engineering and partner Monash University have signed an agreement with global aerospace and defence company Safran to print turbojet components at its factory in Toulouse, France. Toulouse is a major European aviation aerospace hub and the headquarters and final assembly line for Airbus. 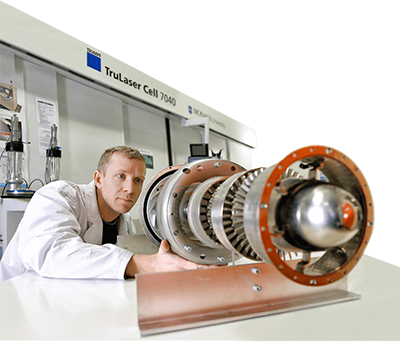 “This is a great example of an Australian business with highly-specialised advanced manufacturing capability,” Australian Innovation, Industry and Science Minister Greg Hunt said.

“The company has collaborated with a leading university and made the leap from the lab to the heart of the global aerospace industry.”

Amaero was subsequently established as a spin-out company from Monash University to commercialise the technology using funding and expert advice from the Australian Government’s Entrepreneurs’ Programme.

Full production is expected to commence in early 2017 following testing and validation phases, and the components will be used in civil and military aircraft.

“This exemplifies the kind of global success that the Turnbull Government’s National Innovation and Science Agenda will help grow by providing support for innovation,” Mr Hunt said.

AUSTRALIA’s major steel research and development centre has received another commitment of $10 million from its major supporter, Shanghai-based Baosteel Group.

The Baosteel Group will also provide additional funds for specific research projects being conducted by the Baosteel-Australia Joint Research and Development Centre (BAJC), which combines the expertise of four Australian universities with the industrial strength of a global steel giant. 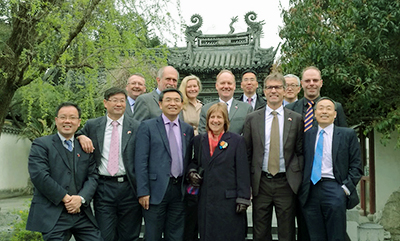 Since 2011 Baosteel has provided about $16 million to BAJC, to support 40 research projects.

The centre has developed new products, including magnesium, aluminium and titanium alloys, and worked on advanced materials including high-performance lithium-sulphur battery cathodes, and graphene.

Baosteel’s investment in the BAJC since its formation in 2011 has been more than $26 million.

Senior representatives of the partner universities also attended the signing, which cements funding for the next five years.

Mr Chen hailed the centre as “an important part of Baosteel’s technological innovation”.
Professor Høj said the reinvestment by Baosteel showed that global business valued the benefits which flow from working with Australian universities.

“It is a strong vote of confidence in Australian university R&D, reaffirming the quality of research available for genuine ground-breaking innovation in line with the National Innovation Statement for Australia,” Prof. Høj said.

“Crucially, the centre has given Australian researchers global industry experience, and in the next five years the focus on internships and international engagement will increase.”

BAJC is Baosteel’s first overseas R&D centre and it has registered 10 patents and attracted $6.2 million in funding from Australian Government research schemes. Universities’ in-kind contributions have totalled $21 million in its first five years.
BAJC director Victor Rudolph said researchers had published more than 150 scientific papers in high-impact publications in the past five years.

“More than 100 Australian professors, researchers and PhD students have visited Baosteel in China for academic exchanges and in 2015, a group of 15 researchers, scientists and engineers from Baosteel visited the BAJC member universities,” Prof. Rudolph said.

The centre holds annual conferences, each attracting more than 80 research fellows and higher-degree students.
“Baosteel has been able to deploy a number of capacity-enhancing and value-adding technologies, as a result of the centre’s work,” Prof. Rudolph said.

These included improvements in steel production processes, and quality control and alloy design in low-cost and high property light metals.

The global competitiveness of Australian universities was reaffirmed in 2016 by the QS World University Rankings by Subject, in which Australia is one of the strongest nations. The stellar results for Australian institutions include a global ranking of 10 for UQ in mineral resources and mining engineering.

The device, named an ‘O2Vent, stops patients from snoring by delivering air to the back of the mouth, alleviating multiple sites of obstruction including the nose, soft palate and tongue. The O2Vent is a revolutionary personalised lightweight titanium device, expected to assist he estimated one million Australians who suffer from sleep apnoea. 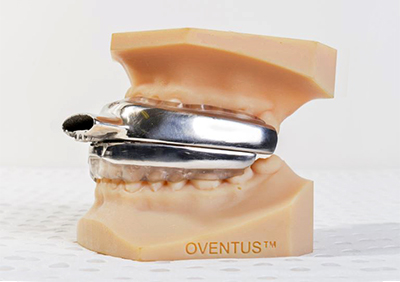 The Oventus 3D printing facility opened in December at CSIRO’s Clayton site in Victoria. The facility will manufacture the O2Vent devices, in the start of a program which is anticipated to change the lives of millions of people around the world with sleep-disordered breathing.

“The partnership between Oventus and CSIRO is an example of collaboration between private sector and public research, creating businesses opportunities and new jobs – a key aim of the National Innovation and Science Agenda,” Innovation Minister Greg Hunt said at the December opening.

“Oventus recently listed on the ASX following a successful IPO that raised $12 million, and they are set to launch onto the US market in early 2017, where over 37 million people regularly suffer from snoring,” he said. 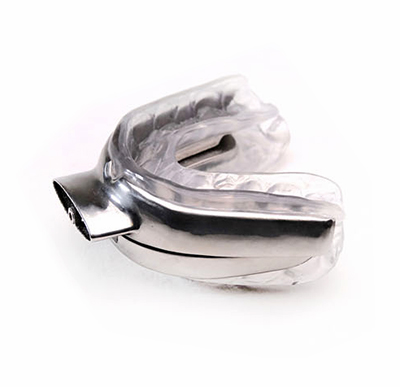 At least Whyalla steel back on the rails

TRAINS carrying steel rail for a major upgrade to South Australia’s rail network began departing Arrium’s steelworks in Whyalla in September, on a contract to supply tens of thousands of tonnes of rail over the next three years.

Infrastructure and Transport Minister Darren Chester said the steel leaving Whyalla would be used to replace old rail on the railway line from Adelaide to Tarcoola with heavier, stronger steel. The contract between the Australian Rail Track Corporation (ARTC) and the administrators of Arrium, KordaMentha, for about 73,000 tonnes of steel was officially handed over in Whyalla on September 8. 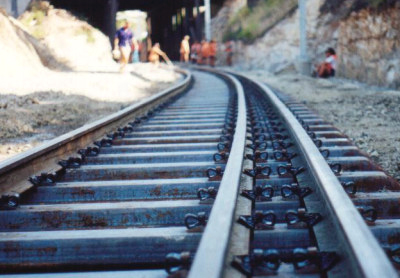 “We are boosting the economy and saving money for freight companies by upgrading this 1,200km of rail to move more freight, faster between Adelaide and Tarcoola,” Mr Chester said.

“In addition to using Arrium’s steel for the railway, we are supporting the industry by using Australian steel across our naval shipbuilding program and by strengthening Australia’s anti-dumping system," Mr Hunt said.

"And earlier this year the government approved a $49.2 million loan to Arrium which will be used to purchase equipment for the company’s iron ore operations near Whyalla. We want to set the right business environment to ensure Australian firms like Arrium can grow, prosper and be globally competitive.”

ARTC Chief Executive John Fullerton said ARTC had been busily finalising a careful, staged roll-out plan for the project, but had a focus on delivering early orders of steel.

“The existing rail between Adelaide and Tarcoola has been nearing its end of life and the new rail delivered by this contract will allow rail operators to carry heavier wagons of freight at faster speeds," Mr Fullerton said. “This means ongoing benefits from this project for Australian businesses and ultimately, consumers.”

The Australian Government is fully funding the re-railing of Adelaide to Tarcoola.

During the address Mr Pyne focussed on disruptive emerging technology and innovation, praising Australia’s response to these opportunities and challenges. He also met with international partners to advocate for Australia’s defence industry and reaffirm the government’s strong support for Australian companies and their important role supporting the Australian Defence Force. 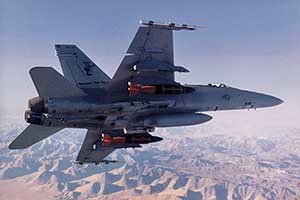 The conference is one of the largest in the world. The last IDEX conference in 2015 saw more than 1,200 exhibitors and 101,000 visitors from across the globe participating, with signed deals amounting to well over A$6.5 billion. This year’s Exhibition is expected to exceed those numbers.

Throughout the conference and during bilateral meetings Mr Pyner reinforced the importance of developing long term industry partnerships to collaboratively develop defence capability.

“Witnessing first hand the quality and ingenuity of the capabilities that our 21 Australian companies have on display here is an exceptional example of what Australian industry can offer to our international partners,” Mr Pyne said.

“Australia has had great success countering disruptive technology such as the threat posted by improvised explosive devices.

“This remarkable technology, developed in collaboration between government and industry, is now saving lives and has enormous potential to be exported across the globe creating jobs in Australia,” he said.

Seeley is using the Chillcel pad technology, for which it has a patent pending, across its entire Breezair range of ducted air conditioners, making it the only manufacturer able to offer evaporative cooling pads fully manufactured in Australia and specifically designed to maximise cooling in the harsh local climate.

“Australia experiences some of the harshest weather extremes found anywhere in the world, so it has been important for Seeley International to design and develop evaporative cooling pads that deliver the best performance outcomes from some of the worst conditions in the world,” Mr Seeley said.

“Sourcing only the best quality paper and then manufacturing the pads locally means we have complete quality control over the saturation efficiencies of our coolers – and we can accurately assess the performance of this and other innovative breakthroughs at our onsite NATA-accredited testing facility.”

Mr Seeley said that another new feature introduced across the Breezair range was the external air sensor, which conveniently displays the outside temperature on an intuitive touch screen wall controller.

“Not only does this technology intuitively optimise water and energy use based on outside surrounding conditions, the life of the air conditioner will be extended because it also automatically drains the water tank when temperatures are near freezing point,” Mr Seeley said.

“These new features ensure Breezair customers are provided with market-leading products made from the best quality materials. Our customers can buy with confidence and know that they are supporting the creation and sustainment of Australian jobs and our local, but world-leading, manufacturing industry.”

“One of the stand-out features of the updated Breezair website is the ‘help me choose’ feature. This helpful tool assists the consumer in choosing a Breezair model that is right for them,” Mr Seeley said.