NSW RESEARCH CENTRES, universities and companies are expected to play a significant role in the development of next generation defence technologies as part of a new Cooperative Research Centre (CRC) for Trusted Autonomous Systems.

NSW Defence Advocate, retired Air Marshal John Harvey, said the new CRC would  tap into NSW expertise as part of national efforts to develop technologies to better equip and protect our defence forces, as well as open up new opportunities for industry.

The Federal Government will be investing about $50 million in the CRC for Trusted Autonomous Systems from its Next Generation Technologies Fund over the next seven years to support autonomous systems projects.

“This is the first CRC in the Commonwealth’s program with a specific defence industry focus,” Air Marshal Harvey said.

Air Marshal Harvey said a number of NSW defence technology companies will be supporting partners in the CRC contributing their industry expertise in trusted autonomous systems. 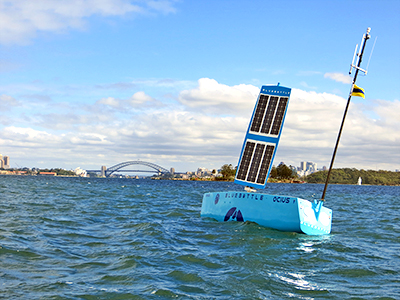 “These include Ocius Technology which has developed an unmanned marine vessel dubbed the ‘Bluebottle’ that is powered by solar, wind and wave energy, and that can be deployed at sea over months for wide area surveillance.

“Marrickville company Marathon Targets is also involved in the CRC. Marathon develops robotic targets for military marksmanship practice and has sold its technology to allied forces worldwide, including the United States Marine Corps.”

The NSW Government recently contributed $1.25 million to help establish a Defence Innovation Network to boost collaboration between universities and the defence industry. “Our Defence and Industry Strategy – NSW: Strong, Smart and Connected – has a strong emphasis on supporting defence scientific research and collaborating with other states, and the new CRC is a great opportunity to do both,” Air Marshal Harvey said.

From Russia with love: 25 year milestone for ‘pool queen’

AS A SINGLE, working mother with two young daughters in Russia, Elena Gosse could hardly have imagined she would become a trail-blazing entrepreneur and CEO of one of Australia’s most innovative manufacturers, Australian Innovative Systems.

In fact, to support her daughters, one with a disability, Ms Gosse made her name in the entertainment industry in Russia and has overcome many battles on her journey to lead the multi-award-winning Queensland manufacturing business.

Elena Gosse and her Russian-speaking Australian husband, Kerry, first met in Russia in 1992 and married two years later.  Ms Gosse and her daughters moved to Australia in 1994, settling in Brisbane. 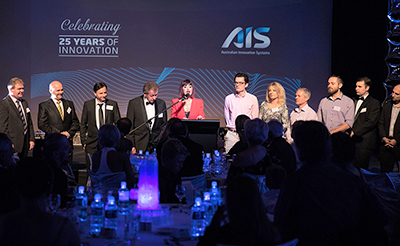 After studying English and completing further Australian education including a second university degree, Elena Gosse started with AIS in 1994, initially working with her husband as company director and secretary.  Since rising through the ranks to the position of CEO, she has become instrumental in the company’s spectacular growth, while Kerry Gosse remains at AIS as a company director.

AIS technology has become trusted by leading aquatic centres, swim schools, competition swimming pools, resorts, hotels, water parks and family swimming pools all over the world and the business is recognised as a leader in the design, production and supply of commercial and residential chlorine generators and water disinfection technology.

“Our unwavering commitment to research and development, along with excellence in manufacturing, has delivered a long list of proud achievements for our company,” Ms Gosse said.

“They include designing and manufacturing world-first technology, winning hundreds of international and national awards, and hosting visits from VIP clients, Prime Ministers and politicians.”

Drawing on her professional skills and extensive business network, Ms Gosse is also passionate about supporting and mentoring other women to help them achieve their full potential.
“My experience as a Russian immigrant has helped me to refine my business and personal vision,” she said. 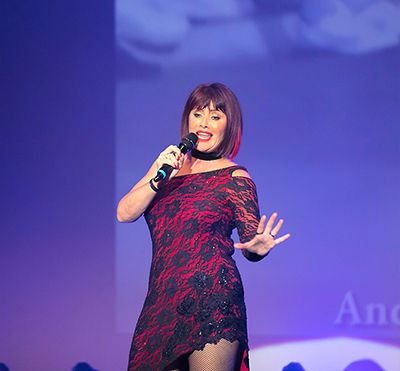 “It has also inspired me to assist other immigrants by encouraging and embracing cultural diversity in the AIS workplace and supporting the local community.”

Ms Gosse is in high demand as a guest speaker at business events and indulges in her lifelong love for acting, singing and dancing.

“Having undergone a dramatic career transformation since moving to Australia, I love sharing my professional and personal experiences with people, particularly other women,” Ms Gosse said.

Australia’s APV belts up US Marines

“This success is yet another win for Australia’s defence industry, and demonstrates the innovation and global competitiveness of our small to medium enterprises.

“APV formerly supplied the Australian car industry, and so this is a great example of an automotive business diversifying into other industries and it is exciting to see an Australia company playing a key role in keeping Australian and US troops safe in front line combat vehicles.”

Mr Pyne said the GSC has provided opportunities for Australian SMEs to compete for work in the supply chains of international defence prime contractors – and close to $1 billion in work has been awarded to mostly SMEs so far.

AUSTRALIAN DEFENCE scientists are using a retired US Navy Seahawk helicopter to develop fatigue testing technologies, which could transform how military helicopters are managed.

The program is aiming to reduce maintenance costs and improve aircraft availability and the companies involved include Nova Systems, Jack Thompson Engineering, Fortburn and Advanced VTOL.

The US Navy has supplied one of their aircraft for the research, and has expressed interest in implementing full-scale fatigue testing of their entire fleet of Romeo Seahawk helicopters. 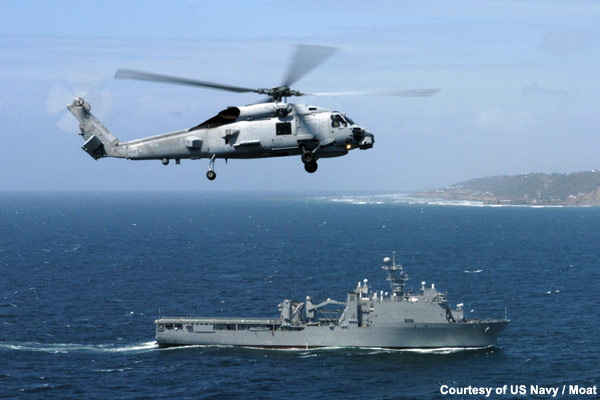 The new technologies could have significant benefits for both military and civilian helicopter operators.

The Defence scientists and engineers are developing a full-scale, structural fatigue test rig that can accurately replicate the loads and forces experienced by a helicopter in flight.

Full-scale fatigue tests are routinely conducted for fixed-wing aircraft, but until now the complex, high-frequency flight loading of helicopters has been particularly challenging to replicate in the laboratory.

“Instead, helicopters are certified using conservative test methods that do not always fully predict the possibility of fleet damage,” Defence Industry Minister Christoper Pyne said. Defence was investing $5 million over the next five years in the project and working in collaboration with industry and the US Navy.

he trial program, including the building of the innovative test rig and test demonstration, commenced late last year and will continue until 2022.

“The program aims not only to develop the capability to fully test and validate helicopter structures, but also to deliver innovations that may be applied to other areas such as the fatigue testing of fixed-wing aircraft,” Mr Pyne said.

“If successful, the technology could represent a considerable commercial opportunity for the defence industry in Australia.”

AUSTRALIA is developing the equivalent of a ‘black box’ for combat soldiers, already dubbed the Fight Recorder.

In a collaboration between the Australian Defence Force and industry, the Federal Government is allocating $700,000 from the Next Generation Technologies Fund to two industry partners – Myriota and IMeasureU – who will fully develop the product.

Defence Industry Minister, Christopher Pyne said the Fight Recorder would be a soldier-worn system aimed at capturing valuable data on the battlefield, and would act as an emergency beacon to reduce the time taken to reach and treat battlefield casualties 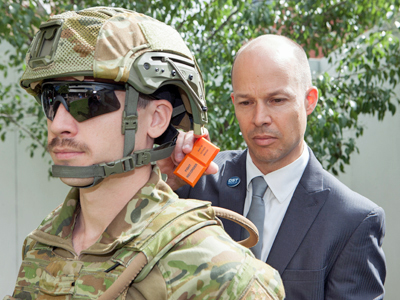 “In addition to serving as a location beacon, the data captured by the Fight Recorder could be used to inform the design and performance of soldier equipment and protective wear.

“Start-up telecommunications company, Myriota and wearable technology company IMeasureU, were selected from 47 quality industry and university applicants from across Australia and New Zealand to develop the Fight Recorder.

“Defence will work closely with these companies to help deliver this world-first innovation. Once again our local small and medium enterprises have demonstrated they are well placed to deliver Defence innovation,” he said.

When fully developed, the Fight Recorder could provide benefits in other physically demanding occupations including emergency services and law enforcement.

These two innovation research and development programs, together with the Centre for Defence Industry Capability, deliver on the Federal Government’s $1.6 billion commitment to grow Australia's defence industry and innovation sector, Mr Pyne said.

‘Factory of the future’ comes to South Australia

THE FORMER Chrysler and Mitsubishi car manufacturing plant at Tonsley, South Australia, has been transformed into a ‘cyber factory of the future’.

Flinders University has installed what it calls a ‘cyber physical factory’ with state-of-the-art Industry 4.0 (i4.0) automation and robotics training, along with capability building platforms, as part of the new $1 million Tonsley Manufacturing Innovation Hub.

Funded by a $490,000 State Government grant, as part of the Australian Government’s Innovative Manufacturing Cooperative Research Centre, the Tonsley Manufacturing Innovation Hub (TMI Hub) aims to accelerate the adoption of advanced digital technologies by local businesses and support the creation of highly skilled jobs for the future. 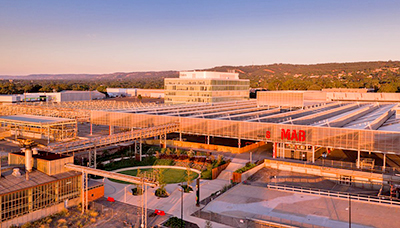 High-tech manufacturers in South Australia have been openly invited to use the TMI Hub to progress their product and business development. Apart from Flinders University, the Tonsley facility has the commercial support of Siemens and TAFE SA.

“The new digital technologies hub will train businesses and students in the implementation of i4.0 technologies that will revolutionise the way manufacturers connect with customers and suppliers through digital internet-based technologies,” Professor John Spoehr, director of the Australian Industrial Transformation Institute at Flinders University said.

“The adoption of digital technologies in South Australia is giving rise to a new generation of manufacturers and highly skilled jobs,” he said.

“The Tonsley Manufacturing Innovation Hub will accelerate this process, helping to ensure that South Australia remains at the centre of high-technology manufacturing in the nation.

“We welcome the opportunity to partner with the State Government and the Innovative Manufacturing CRC to establish a truly world class facility at Flinders University, Tonsley.” 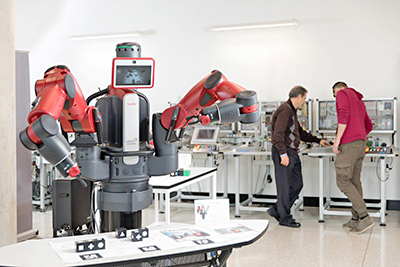 Prof. Spoehr said the TMI Hub would provide both practical training and real-world research opportunities for businesses, students and researchers wanting to learn more about automation, advanced robotics and the Internet of Things.

Call to arms for Australian business

AUSTRALIAN companies are being invited to join forces with Defence contractor Raytheon to participate in the new Short Range Ground Based Air Defence project.

Defence Industry Minister, Christopher Pyne has launched Raytheon Australia’s LAND 19 Phase 7B Supplier Portal in a bid to get more local companies involved. He said the portal would allow Australian companies to register interest in areas such as component manufacture, assembly and test, systems integration and in-country sustainment.

Worth up to $2 billion, the project will deliver Army’s future Short Range Ground Based Air Defence (SRGBAD) capability based on the proven National Advanced Surface to Air Missile System (NASAMS) which is fielded in seven nations, including the United States. 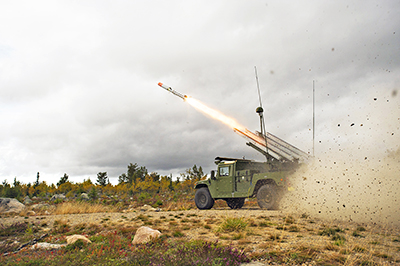 “We want to create as many local jobs as we can and Raytheon’s response has a strong focus on identifying opportunities for Australian companies to participate in the project,” Mr Pyne said.

“This portal is the first step in engaging local industry, in particular, small and medium enterprises, to develop the partnerships needed to deliver a world leading SRGBAD capability.

Raytheon will conduct a series of industry showcases in every capital city later this year. This will give companies which have registered on the portal the opportunity to discuss their capabilities with Raytheon.

The cut-off date to register on the portal is October 25.