Arts research at your fingertips

THE Australia Council has developed a new online resource giving up-to-date information about arts and culture engagement, employment and business activity across Australia.

The Australia Council’s interactive resource provides region-specific data broken down into Australia’s 150 federal electorates. It reveals how the majority of Australians engage with arts and sport, and demonstrates how people living in regional Australia are prepared to travel for cultural and sporting events.

The interactive page allows users to choose an electorate from a drop-down menu or map which then displays statistics on arts and culture engagement.

Some of the other valuable insights include ticketing trends and participation rates. The tool helps people working in the arts and culture sector gain a better understanding of audience habits and preferences. 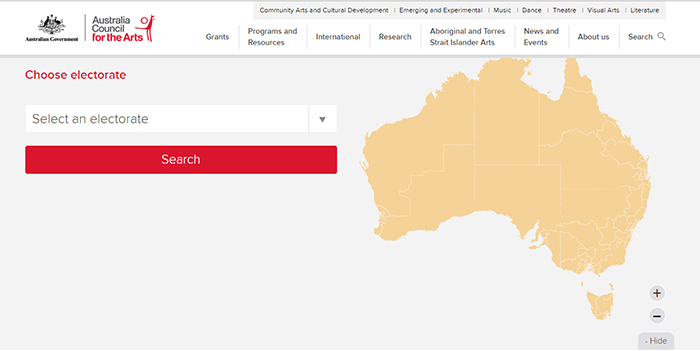 The feature-length 100% Wolf is based on the book of the same name by Western Australian author Jayne Lyons. The film will be directed by Alexs Stadermann and has been adapted for the big screen by long-time collaborator Fin Edquist, with Barbara Stephen and Alexia Gates-Foale producing. 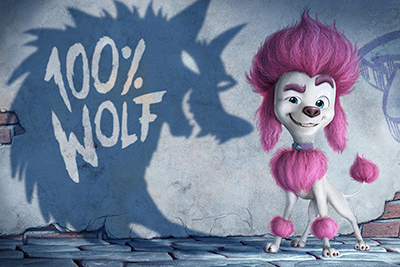 The movie tells the story of Freddy Lupin, heir to the leadership of a proud family line of werewolves.  Positive he will become the most fearsome werewolf ever, Freddy is in for a shock when on his 14th birthday his first ‘warfing’ goes awry, turning him into a ferocious… poodle.

The pack elders give Freddy until the next moonrise to prove he has the heart of a wolf, or risk being cast out forever. With the help of an unlikely ally in a streetwise stray named Batty, Freddy must prove he is 100% Wolf.

“The experienced team at Flying Bark Productions have a successful track record in delivering animated features with global appeal, including Maya the Bee and Blinky Bill: The Movie, which combined have released theatrically in over 80 countries,” Screen Australia’s head of production Sally Caplan said.

“With a great script exploring universal themes of friendship, difference and acceptance, 100% Wolf is sure to be a hit with family audiences worldwide.”

“For a number of years Screenwest has worked with and supported Francesca Hope and the talented team at Siamese, who will co-produce with Flying Bark Productions, and we are delighted to back 100% Wolf,” Ms Bestall said. “It’s great to see a story set in Fremantle that will provide long-term employment opportunities, broaden the skills capabilities of the local screen sector, and raise the global profile of the Western Australian animation and post production sector.”

“We are thrilled to have received so much support from Screen Australia, Screenwest and Create NSW to bring Jayne’s book to life,” said producers Barbara Stephen and Alexia Gates-Foale.

“100% Wolf is a great opportunity for the Australian production industry to work together to create a world class animated feature. Freddy and Batty have wonderful character journeys in this film and we are positive their stories will resonate with audiences in Australia and around the world.” 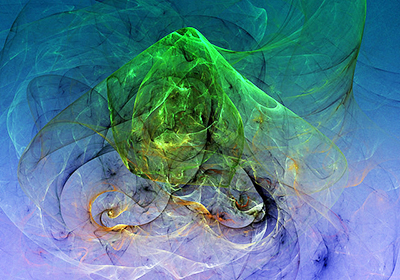 SCREEN AUSTRALIA is backing 14 features, one high-end television project and two online series to the tune of $500,000.

There are also four supported talent development placements among the projects.

“This includes projects that are continuing their journey towards production, as well as new projects added to the development slate. 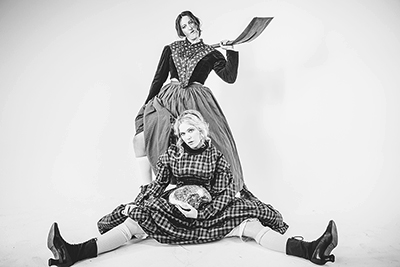 Among the projects funded for development are:

Rita Kalnejais’ adaptation of her successful stage play Babyteeth, with Shannon Murphy (Offspring, Love Child) attached to direct her feature debut. A bittersweet comedy about how good it is not to be dead yet and how far we will go for love, the film will be produced by Alex White, with Jan Chapman as executive producer.

Television drama series Darby and Joan, about two strangers who set out on an epic outback journey, is to be produced by Claire Tonkin and Glenys Rowe for CJZ, with executive producers Matt Campbell and Nick Murray, and writer Phillip Gwynne (Australian Rules).

Godfrey, from AACTA-award winning writer/director Wayne Blair (The Sapphires, Cleverman) and Emmy-nominated and AACTA-award winning writer Gerard Lee (Top of the Lake, Breath), which will be produced by Jamie Hilton and Ester Harding for See Pictures. The film tells the story of Godfrey, a man in his 30s with autism who lives with his Indigenous adoptive-brother David. Their precarious domestic balance is destabilised when Godfrey’s new physiotherapist Annie arrives in town.

Online comedy series Gold Diggers to be directed by Shannon Murphy, written by Jack Yabsley and produced by Muffy Potter. The executive producers will be Muffy Potter, Michael Horrocks and Trudi-Ann Tierney, and follows two women in the Gold Rush in Australia who go in search of their own jackpot: newly rich idiots.

Award-winning director Rachel Perkins (Jasper Jones) and writer Craig Silvey (Jasper Jones) will reunite for feature The Prospector. This period drama/thriller is set in Western Australia’s Gold Rush, where a woman searches for her missing husband and is forced to question if he truly is the man he claims to be. Miranda Dear and Darren Dale will produce for Blackfella Films.

Stolen is writer/director Catriona McKenzie’s second feature film project, following the award-winning Satellite Boy, and is co-written with Patricia Cornelius (Blessed). Stolen tells the story of a white baby girl who is brought into an Aboriginal community by a dingo. The mystery of her and those around her unravels in reverse-chronological order to reveal who she is and how she came to be. McKenzie will also produce, alongside Liz Kearney for Arenamedia.

Contemporary choreographer Stephanie Lake, the recipient of the fellowship for dance, will use it to support the development of a large scale work involving more than 50 performers.

“This fellowship really allows me to keep going, and to be even more ambitious in what I can achieve,” Ms Lake said.

Paul Jackson’s fellowship for theatre will allow him to expand his practice as a multi-award winning lighting designer.

“This really is a key program for providing support and encouragement for mid-career and established artists,” Mr Jackson said. “It enables you to do those things that simply aren’t possible when you're going from job to job trying to make a living.”

The recipient of the community arts and cultural development fellowship, Simon Spain, said the fellowship would support him to continue creating and connecting communities of young people through the arts.

“It will allow me to better advocate for arts and artists in Tasmania and, importantly, to give more of my time to that work,” Mr Spain said.

For composer Andrée Greenwell, the music fellowship will allow her to pursue a series of ambitious projects, including the development of a new work for Opera Queensland.

“I’m honoured and very excited to be undertaking collaborations with leading Australian artists and organisations through this award,” Ms Greenwell said.

“I think it’s important for our culture. To have an Australia Council, and to have support for the arts in this form is an acknowledgment that the arts matter,” Mr Zable said.

WITH only a few weeks remaining for female singer-songwriters across the state to enter Queensland Music Festival’s (QMF) 2018 Carol Lloyd Award, artistic director Katie Noonan is calling out to musicians to enter the award for a chance to be presented with a $15,000 grant to kick start their career. 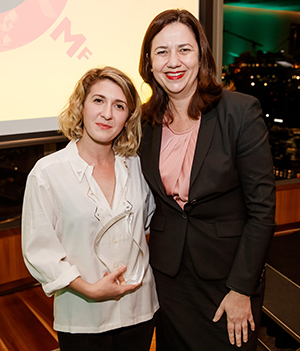 The Carol Lloyd Award was launched in 2016 in honour of Australia’s first ‘Rock Chick’ Carol Lloyd, with the aim of supporting the state’s emerging female musicians. Each year, one exceptional artist either born in or currently residing in Queensland, is awarded the funding to assist in recording an original full-length album, or record and tour an EP, as well as broadening their experience in the music industry and connecting with some of Queensland’s most respected artists.

In 2017, eclectic alt-pop musician Georgia Potter, also known as Moreton, was selected as the inaugural Carol Lloyd Award winner. Ms Potter has used the opportunity and Lloyd’s legacy to make crucial industry connections and take the next step in her career.

"The award has meant I’m now at the cusp of releasing Moreton's sophomore record. Without the funding or the support from the Carol Lloyd Award, I'm not sure I'd be standing at this juncture quite as quickly,” said Ms Potter.

Hosted by QUT Creative Enterprise Australia (CEA), Creatively Squared will now go on to represent Australia as part of the Creative Business Cup challenge in Denmark in November, as well as take part in the Virgin StartUp accelerator program, StepUp. 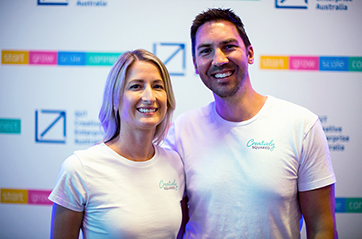 “We’ve built our platform to be global from day one, so to be able to share our vision on the world stage at the Creative Business Cup is a great opportunity for us.

“We’re so thankful that CEA gives creative businesses like us the opportunity to challenge ourselves and present our businesses at this level. It’s really positive to see the creative industries in Australia continue to diversify and grow.”

The Creative3 Pitch breakfast kicked off the beginning of the Creative3 Conference at the Brisbane Convention Centre on September 22.

Creative3 is Australia’s only conference for creative tech start-ups. The conference gives start-up founders the opportunity to hear from international and national speakers, as well as experts within the industry, including SOSV managing director William Bao Bean and Annie Parker from Fishburners and Code Club Australia.

“Starting a company from scratch and working it to scale is challenge enough in itself, let alone presenting that company to a room full of potential investors and experts in your industry.

“We’re really proud to be able to offer up Creatively Squared as the Australian representative for the Creative Business Cup, and look forward to being able to follow their growth in the years to come.”

Other finalists for the Creative3 Conference were start-ups Pluss, Postie and Folktale.