Seeing Machines gets a global view with Efic

Founded in 2000 as part of an association with Australian National University, Seeing Machines today is at the forefront of driver monitoring technology and has more than 200 staff and operations worldwide including the US, the UK, South America, Europe and across South East Asia. 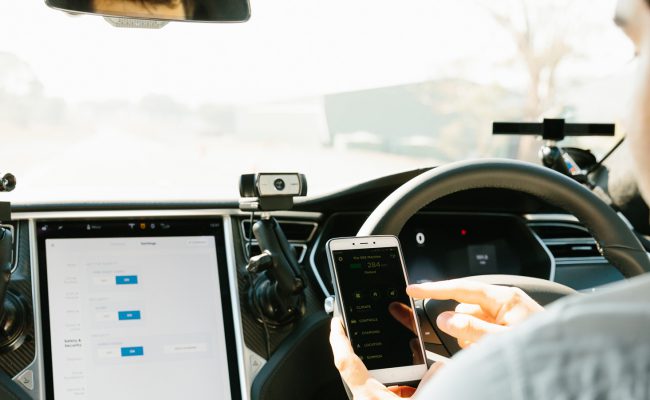 “The primary application is driver monitoring systems, and it basically monitors driver attention for drowsiness and distraction using face recognition and eye-tracking. The aim is to reduce accidents and help save lives.”

It was in this resource-boom period that the organisation started exporting, taking advantage of opportunities in overseas markets which were also benefiting from growth in the mining sector.

This resulted in an exclusive global partnership with Caterpillar in 2015, through a licensing agreement, which has enabled Seeing Machines to expand its capabilities into other transport areas and expand its footprint globally.

“In 2016 our attention turned to taking the product and making it work for coaches and commercial fleets,” Mr Palmer said. “That led to the birth of our fleet business.

“Our products had to be retro-fitted to suit the needs of lighter, less rugged vehicles and we also looked at applications for the automotive sector.” 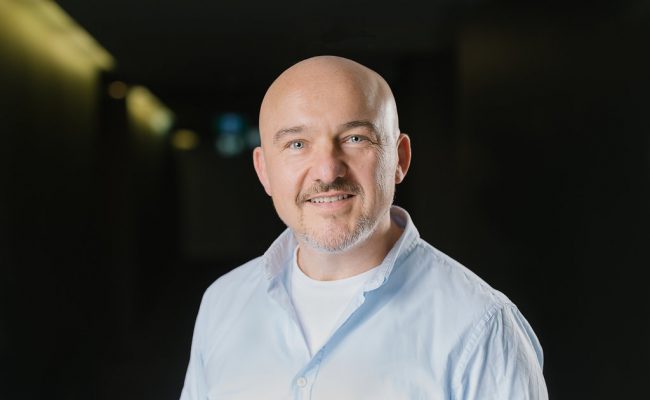 Working as part of a supply chain, Seeing Machines has built relationships with a range of corporates that sell bundled solutions to automotive companies. Seeing Machines’ FOVIO software was launched in September 2017 in the General Motors CT6 Cadillac.

“It’s the first car to have ‘level two’ autonomous driving that monitors the driver during hands-free driving to ensure that the driver can take over when conditions change,” Mr Palmer said.

“We are also working to deliver the technology to other automotive brands. The lead times are huge so we will only see the next vehicles with our driver monitoring technology roll off the production lines from 2021.”

In 2017, Seeing Machines experienced a growing demand for its expanded range of solutions, winning business from the reputation of its market-leading technologies.

The executive team recognised the business was evolving from what was effectively a technology start-up to a more mature business. There grew a rapid need to scale for greater manufacturing volumes and dealing with multiple overseas suppliers.

One of the key opportunities that the organisation was looking at was a landmark contract with Thai-based distributor, Kiattana Transport, in the fleet business. Seeing Machines won a contract to deliver 8,000 units of its Guardian driver monitoring units and needed working capital to manage manufacturing and delivery by June 2018.

Mr Palmer said the company explored opportunities with their own bank and also several others.

“Their answer to us was always that we were a little too early stage for them,” Mr Palmer said. “And in fact, one of the banks we were talking to did suggest Efic as an option. 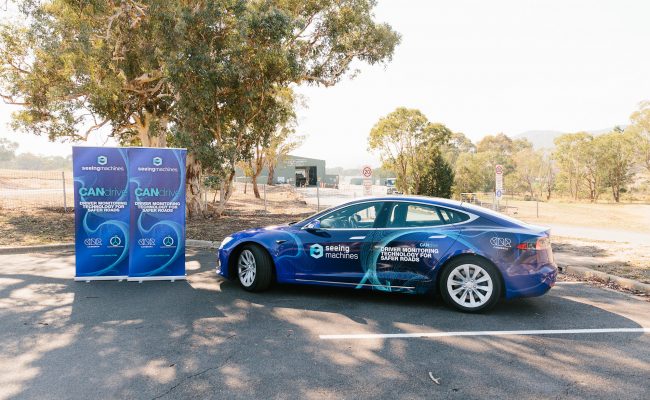 “Efic really took the time to understand our business and to model the cashflow that worked with our distributors. In fact, some of the modelling we did as part of the due diligence actually helped us think through some of our cashflow planning,” Mr Palmer said.

In September 2017, Seeing Machine was able to access a US$2 million export line of credit facility. This was seen as the first step to expand the relationship with Kiattana Transport and increase the export capacity of the business.

“Kiattana is very passionate about our products and we are also working closely with them on the monitoring component of our service,” Mr Palmer said.

“Without Efic’s help, delivering on that contract would have given us real headaches in terms of being able to manage the working capital requirements.

“This is the first time this company has ever had any debt, because we’ve always been a start-up. It’s a sign of a company maturing when they need to access facilities like the one from Efic.”

He said with first-mover advantage in both fleet and automotive markets, the company was looking at some exciting growth opportunities in international markets.

Always the innovator, Seeing Machines is also looking to grow into additional transport sectors and have teams developing future solutions for rail and aviation.

Efic is the Australian Government’s export credit agency, helping Australian businesses to access export finance when their banks may be unable to assist.

AUSTRALIAN Small Business and Family Enterprise Ombudsman, Kate Carnell, has predicted 2018 will be a year of strong growth for small business exporters. 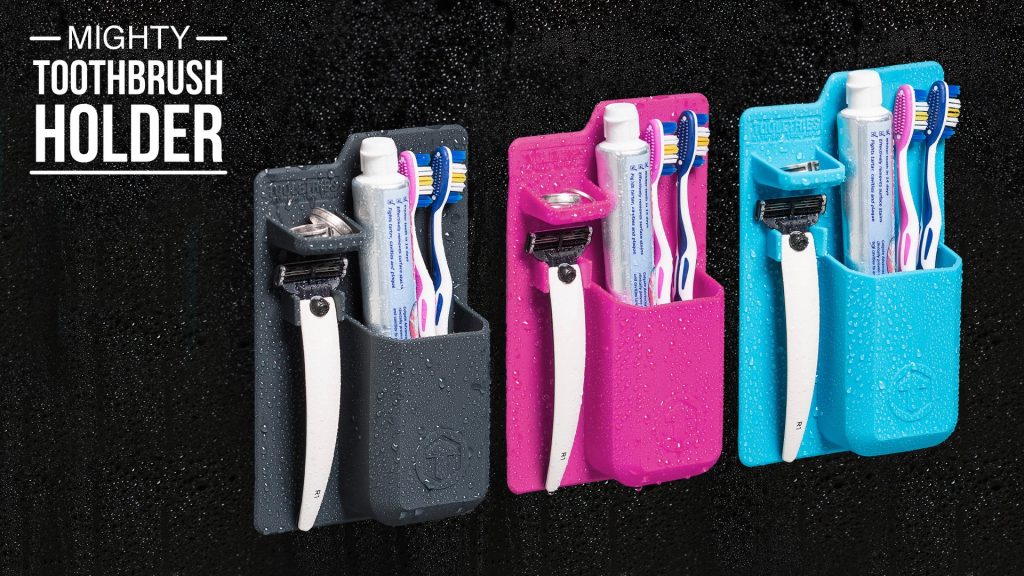 Funded by private capital and a Kickstarter campaign, Tooletries designs and manufactures bathroom accessories such as mirrors, toothbrush and razor holders and wall organisers that can be fixed to vertical surfaces utilising the company’s patented silicone technology.

The company’s products are stocked in more than 1500 retail stores and supermarkets across the US, and are available in Canada, Germany, Japan, New Zealand, Singapore, Taiwan and the UK.

In agriculture and wholesaling, two thirds of businesses believe the outlook is better than the previous two years, Ms Carnell said.

The report identified China, the United States and United Kingdom as being markets where strong revenue growth would occur.

Commissioned by the Export Council of Australia – with support from Austrade, Australian export finance organisation Efic and the University of Technology Sydney (UTS) – Australia’s International Business Survey 2017 collected the opinions of 941 firms from 19 sectors undertaking international activities in more than 90 overseas markets. 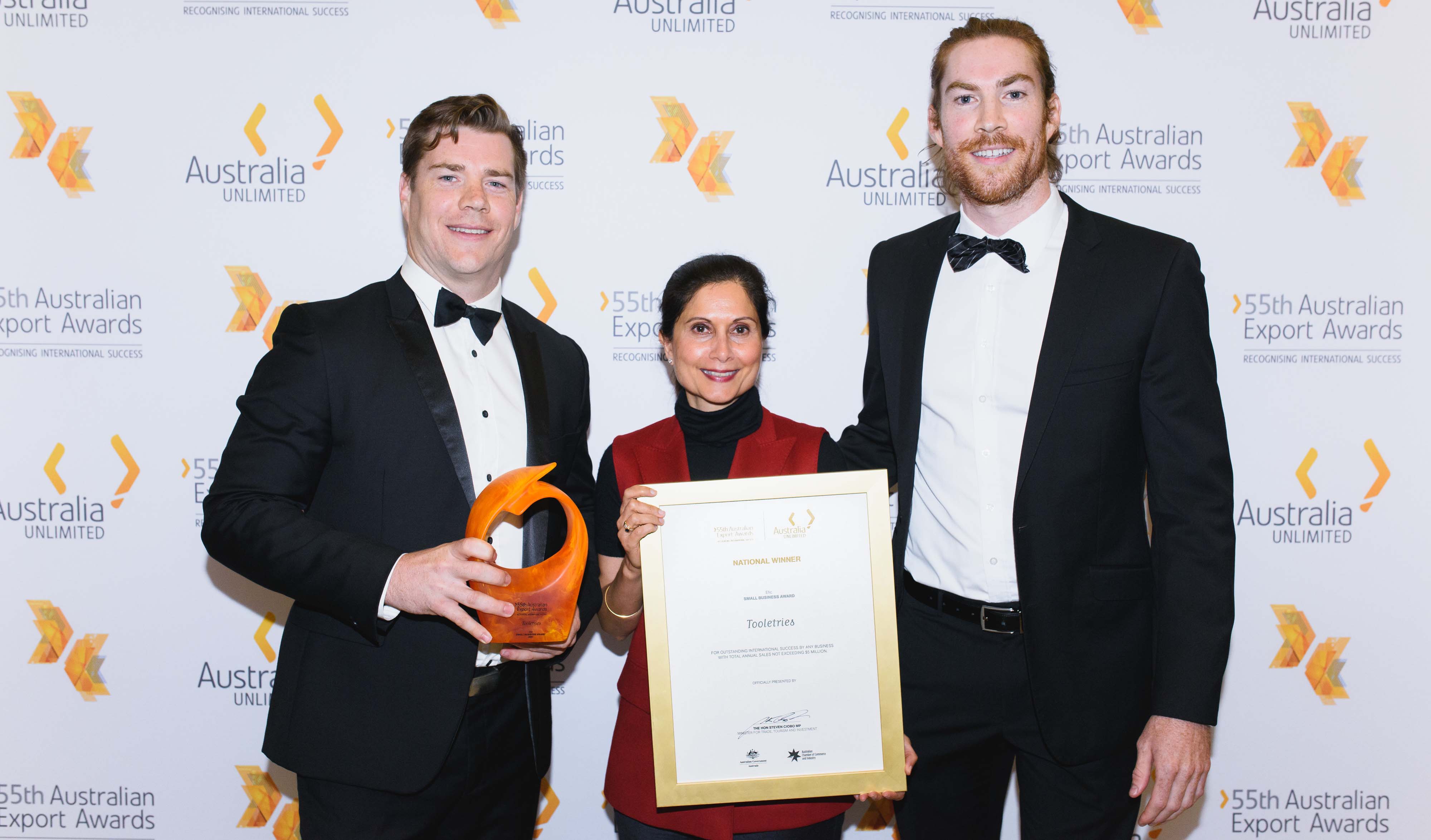 “An increasing number of firms are ‘born global’, which means they’re exporting at the very beginning.”

“Potential exporters need to know there is support available from Austrade and Efic to research their markets, make connections and obtain finance,” Ms Carnell said.

“Over the past three years, Efic has worked with more than 262 small businesses and provided more than $350 million in financial support.

“Efic is the Australian Government’s export credit agency; it operates on a commercial basis and partners with banks.

“It’s a model I believe should also be looked at for small business finance more broadly.”

The survey showed just over one third of respondents had applied for finance and almost 40 percent of these were unsuccessful.

Ms Carnell said this illustrated the challenge for small businesses to obtain capital from traditional banks, which require property as security.

“It’s great that more entrepreneurs are getting started with exports, but rapidly growing small businesses need sources of finance that don’t require putting the family home on the line,” she said. 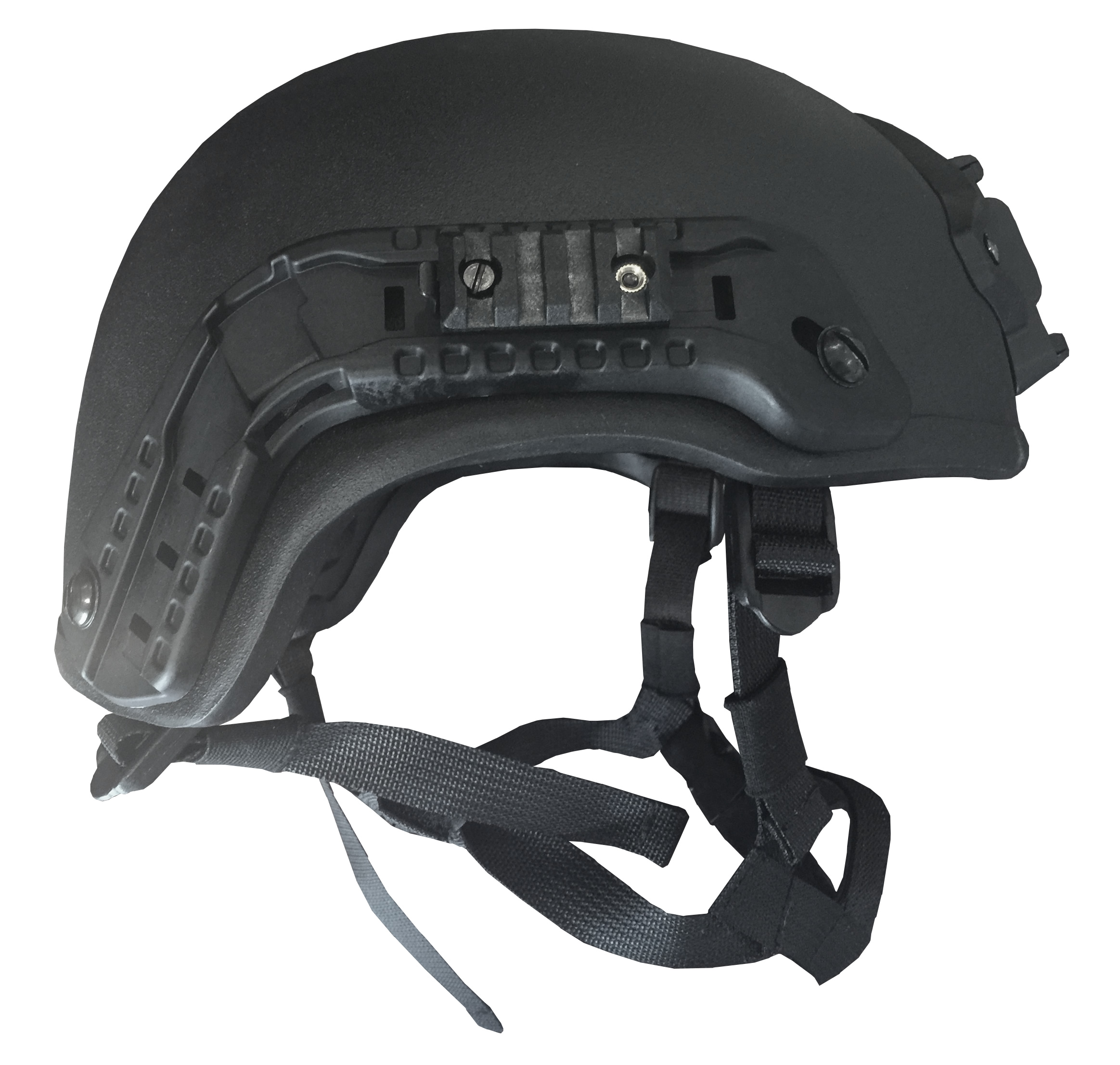 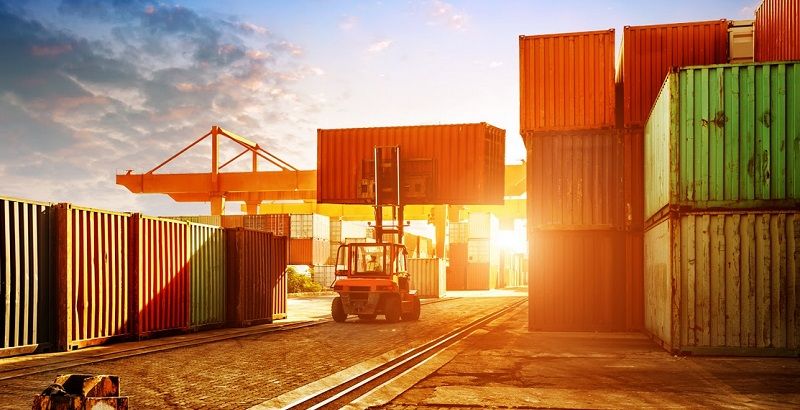 THE Export Council of Australia (ECA) has applauded the Australian Government’s leading efforts in establishing a work program to set rules for digital trade at the 11th World Trade Organisation’s (WTO) Ministerial Conference (MC11) this week in Buenos Aires, Argentina.

Minister for Trade, Tourism and Investment, Steven Ciobo said this initiative would put in place a framework to shape the rules of international e-commerce in the years to come.

It included 70 of the WTO’s 164 members that collectively account for more than 75 percent of global trade, including the US, Japan and the European Union.

Ms McAuley said the agreement would assist in implementing basic standards for digital trade in areas like consumer protection and electronic contracts.

Such standards may play a critical role in removing barriers and complexities to digital trade, with studies finding that around 70 regional trade agreements around the world currently include chapters on e-commerce, according to the ECA.

EVOLVE Skateboards has won the Premier of Queensland’s Exporter of the Year Award, as well as the E-Commerce award.

Resources on agenda during Australia Business Week in India

Building on the first Australia Business Week in India in 2015, more than 150 business delegates took part this year. Australia’s delegation met Indian businesses and officials in more than 75 sessions and site visits.

“India is the world's fastest growing major economy and our trade and investment ties with this important partner are becoming stronger each year,” said Assistant Minister for Trade, Tourism and Investment, Keith Pitt, who led the mining services aspects of the trade mission.

“By 2030, India is forecast to be the third largest economy in the world, and will also have one of the youngest populations,” Mr Pitt said.

“The opportunities for Australian businesses are profound and I congratulate the large number of delegates for joining Australia Business Week in India 2017.”

The business mission overall was led by Trade, Tourism and Investment Minister, Steven Ciobo. Australian Government Ministers planned to visit cities including New Delhi, Mumbai, Bangalore, Kolkata, Hyderabad and Bhopal, but some of those sessions were curtailed owing to localised flooding.

Mr Pitt said he focused on the energy and resources sector delegation across both New Delhi and Kolkata.

Mr Pitt said Australia was a major supplier of energy to India. Australia’s exports of coal helped to underpin India’s goal of energy security and Australian firms in the mining, equipment and technology services – known as the METS sector -- were also helping to improve the safety and efficiency of India’s mines.

"Two-way trade between Australia and India has grown rapidly but more can always be done to expand our trade and investment ties, particularly by bringing businesses together,” he said.

“Australia Business Week in India 2017 will build on the success of the inaugural event in 2015, which created lasting relationships and generated millions of dollars of business.”