WINNER of the No Boundaries Data Hack category in the 2016 GovHack Red Carpet Awards, Legends of Tomorrow, could open up new possibilities for predicting Australia’s regional futures.

Legends of Tomorrow, developed by the Shape the future team from Victoria, used a range of government population, environment and weather data to project the future of neighbourhoods, including population, cultural backgrounds, environment including vegetation and waterways,  and potential future climate conditions. 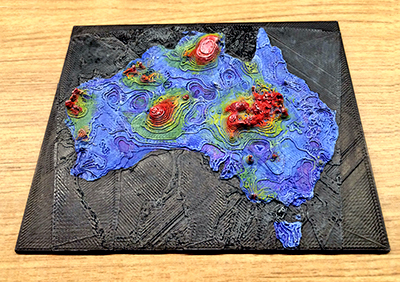 The 2016 GovHack Red Carpet Awards were held in Adelaide on October 22. The event is backed by Geoscience Australia and entrants to use government data from multiple states and territories to unlock the value of data across borders..

GovHack is a three day ‘hackathon’ that sees teams from across Australia and New Zealand compete to develop new applications using open government data. The volunteer-run event is sponsored by large technology companies, several government departments and a range of high-visibility start-ups and innovators.

As part of its contribution to the 2016 competition, Geoscience Australia offered key datasets and sponsored the Exploring Underground bounty prize. Together with PSMA Australia, Geoscience co-sponsored the Major GovHack prize for the best No Boundaries Data Hack. Both prizes were presented at the awards ceremony by the Assistant Minister for Industry, Innovation and Science, Craig Laundy.

Geoscience Australia encourages use of its data for real-world outcomes, and helping people to engage in, understand and use scientific information in their everyday lives. As the national geoscience agency, it holds a vast range of geoscientific and geographic data that supports the management of Australia's precious water resources, hazard modelling for safer communities, exploration for mineral and petroleum resources, as well as helping to manage Australia's maritime jurisdictions.